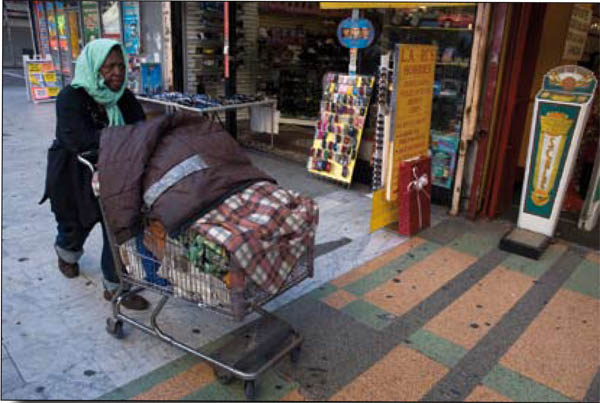 A spotlight was thrown onto the homeless capital of the world after a visit by the Duke and Duchess of Cambridge during their recent tour of North America.

Prince William and his new bride Kate spent the day at a children’s arts centre in Skid Row - an impoverished five square mile area of downtown Los Angeles where around half of the population of 17,000 live below the poverty line.

The notoriously deprived area has around 7,000 homeless people, the largest stable population in the United States, and the streets are lined with tents and cardboard boxes. William and Kate, who are more familiar with the glamorous trappings of their royal lifestyle, saw men and women pulling shopping trolleys containing their scant belongings and tents erected on pavements as they were driven through the streets.

The couple were visiting Inner-City Arts - a project delivering dance, drama, music, ceramics and visual and media arts to around 10,000 children each year. Some 30,000 ‘at risk’ children live within a 2.5-mile radius of the centre, 90 per cent of them living below the poverty line. Its interests overlap with those of British homelessness charity Centrepoint, of which the prince is patron (see Centrepoint threaten to strike).

The aim of the royal visit, during a three-day trip to California in July, was to learn about the extent of homelessness and the issues affecting children in Los Angeles. Whilst at the centre, William and Kate heard about the challenges faced by children in the area, before sitting at easels to paint.

Cynthia Harnisch, the academy’s president and chief executive, spoke to the couple about Skid Row and the challenges of poverty and homelessness faced by many students at the school. She said: “Everyone has felt so uplifted that the most famous couple in the world came to their campus, visiting their neighbourhood.”

But some Skid Row residents were less than impressed. Sitting on a piece of cardboard, Victor Green, 53, said: “It’s a dog-and-pony show. It’s not going to change anything.”

Inner-City Arts, a not-for-profit organisation, has seen 150,000 vulnerable youngsters walk through its doors to be taught performance and visual art since it was founded in 1989.