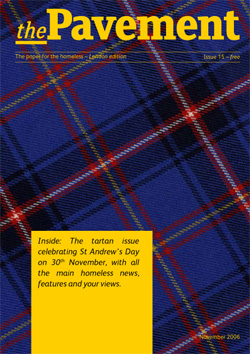 Alternatives to hostels: No. 3 - The Homeless Front 20 May 2009
Oregon‘s Dignity Village is the greatest accomplishment of the American poor since Rosa Parks refused to get off the bus
Cardboard Citizens do Timon 20 May 2009
Homeless theatre company tackles Shakespeare and a tour
Street count figures 20 May 2009
September numbers for Westminster

Scots Wahey! 20 May 2009
Charity aims to double the number of people it reaches within five years

A lexicon of homeless industry jargon: No. 3 20 May 2009
The Pavement clarifies some of the hostel-speak you will encounter

Fareshare 20 May 2009
Where have the M&S sandwiches gone, a reader asks