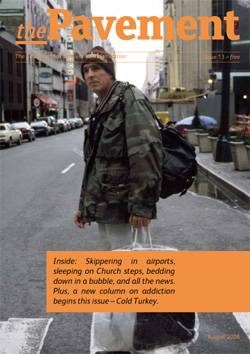 Alternatives to hostels: No. 1 - paraSITES 21 May 2009
Bedouin technology meets modern urban environment in Michael Rakowitz‘s collapsible dwelling
Heroin scare 20 May 2009
Be aware of smack in the Croydon cut with Rohypnol-like substance
Legal lounge: bankruptcy 21 May 2009
If you are inundated with threatening letters and phone calls, there‘s a possible way out

459 Rough sleepers in England? 20 May 2009
Street homeless numbers are plummeting, but only according to official figures
Another Church eviction raises question about \'targeting hotspots\' 26 September 2009
Church move-on was an exercise in displacement, resettlement figures suggest
At your convenience 21 May 2009
The humble public lavatory is on the decline in London
Crisis Conference 20 May 2009
Homelessness charity focuses on alternative routes to get homeless people back into work
GROW growing 20 May 2009
Thames Reach Bondway aims for at least 10 per cent of its workforce to be former homeless people
Into outsider art 20 May 2009
In the world of contemporary art, ‘outsider‘ takes on a more positive connotation

Are you a freegan? 21 May 2009
Nearly a quarter of the food buried in British landfill sites is edible, and freegans want to change our thinking about waste
In terminal decline 20 May 2009
Our post-9/11 world means that airports are less welcoming to the homeless

A lexicon of homeless industry jargon: No. 4 21 May 2009
A brief introduction to the sector‘s catechism of cliches
Controlled Drinking Zones 21 May 2009
CDZs give sweeping powers to the police to arrest anyone who is drinking in a public place
Oi, mate, I\'m A8: day centres 25 September 2009
Are homeless day centres acting "illegally" for helping new A8 migrants?