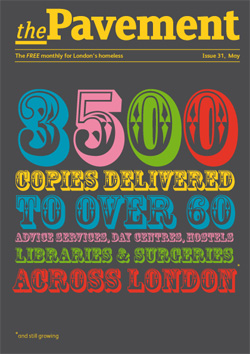 Feeling a bit rough? Have you tried NHS Direct? 21 May 2009
It‘s 24-hour, non-judgmental, confidential, and useful if you are not so keen on having someone access your medical records

'No sleeping' signs still on the Strand 25 September 2009
Some shopkeepers claim the signs are ineffective, but others still post them
An old kidnapping 21 May 2009
A homeless man was forced to throw himself from a moving van after being held against his will
Back on My Feet 21 May 2009
The Philadelphia running club‘s homeless members have lost weight, quit smoking and become more energetic
Concern over homeless health services 21 May 2009
Open commissions could lead to readers being sidelined and forgotten
Murder in Essex 21 May 2009
A 38-year-old man was due to appear in court last week, charged with murdering a homeless man whose body was found in a disused Scout hut in Essex
New Simon Community street caf?¬© venue 21 May 2009
The St Giles-in-the-Field cafe‘s mix of food and advice is a roaring success

Hospital discharge - another response 21 May 2009
A reader poses a tricky question: how do you discharge Eastern European patients who have no alternative to the street?
Mayoral elections - a response 05 May 2008
The founder of Centrepoint picks Ken Livingtone up on a remark he made in a recent interview
Poetry on the Big Issue 21 May 2009
We‘re publishing James McCue‘s poem, written in his creative writing group, in the hope it will produce some debate
Shelter report - a response 21 May 2009
A day centre worker reveals the ways HPUs fob applicants off
Vote? What for? 05 May 2008
The general election proved that nothing ever changes, says a reader