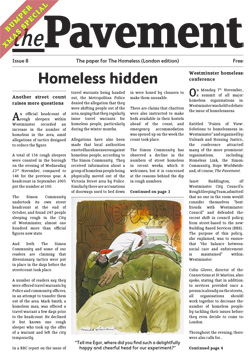 A penny for 'em 25 September 2009
A new use as been found for an old WC - supporting drug users
Christmas services at Crisis 18 May 2009
It‘s Christmas, and many readers are heading for Crisis‘s six centres
Homeless hidden 26 September 2009
Another street count raises questions amid allegations of dubious tactics
I\'m a celebrity... let me sleep out here 25 September 2009
Chris Tarrant and Jeremy Beadle - accompanied by a security guard - bed down in Covent Garden
New survey lists homeless woes 26 September 2009
Half of those surveyed had health problems ranging from mental illness and alcohol abuse to the many cases of easily treatable diseases
North Lambeth Day Centre will not reopen 18 May 2009
Rumours of NLDC closure prove true, though reasons are not given

Crossing the \'digital divide\' 10 July 2009
Following up on a story on the internet, we ask whether internet access is a useful tool if you‘re homeless

A hostel Christmas 18 May 2009
We welcome a new columnist, ‘Insider‘, who will give the view from inside hostels