From living on the streets to living out his dreams 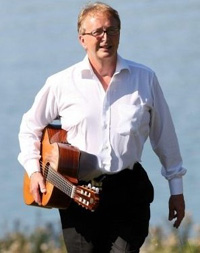 Former rough sleeper is now a composer and published author

Following decades of struggle, Stuart Sharp from Sheldon has completely turned his life around. No longer sleeping on the streets of Shepherd’s Bush, but an acclaimed composer with a published biography about his experiences.

Mr Sharp’s life was turned upside down when his son Ben died after complications during childbirth. The trauma also left his wife ill and in hospital for almost a year, leaving Stuart to look after their daughter, Emma. Following the death of his son, Stuart became increasingly depressed and turned to alcohol, something that, working in a pub, was readily available to him. Music was what helped Mr Sharp through his suffering: “On the night of Ben’s funeral I had a vision of soothing, beautiful music and it gave me great comfort”.

Stuart decided he wanted to create the music he had seen, believing in his dream so much that he left his family to embark on the journey. “Because I was convinced the dream on the night of Ben’s funeral was my future and that of my family, it became a journey of no return.” His wife tried to get him to return home, but Stuart strongly believed that his music would enable him to create a better life for his family, saying he would be able to take them on trips around the world. “Such comments only served to ensure the end of my marriage and a terrible disconnection with my daughters for a number of years. I felt well and truly in the wilderness.”

From living in a dishevelled Ford Estate, Sharp moved from hostels to homeless shelters earning small cash where he could. He began to sleep outside the BBC studios, Wood Lane, London. Buying a guitar for 50 pence, he tried to strum the music he had heard as best he could.

It was here Stuart’s luck began to change. Jazz musician Anthony Wade saw Stuart and took the time to hear his story. He gave him a place to stay and a way of turning his imaginary music into notes on paper. Since then, Stuart has become a self-made millionaire with a successful career in sales and property. Yet he still hadn’t fulfilled his dream of seeing his music on stage. “By 1994 I was rich and had a huge home in central London. I decided to buy a recording studio so I could finally realise my dream.”

After what he describes as a “15-year struggle”, Mr Sharp’s vision became a reality. Working with the London Philharmonic Orchestra and conductor Allan Wilson, the ‘Angeli’ symphony came to life. “It took many years to get the symphonies out of my head into manuscript form and Anthony Wade became my fingers on the ivories. Five years later and further orchestrations by conductor Allan Wilson, it was completed.

Mr Sharp went on to say that it was his mother Phyllis, and his early years in Sheldon that gave him the determination and drive to follow his dreams and see them through. “My mother was a Brummie through and through and I was lucky to have inherited her incredible spirit of adventure.”

Stuart’s book The Angels is out now and he will be in Birmingham in the next few weeks to begin his promotional campaign.