The death of Kelly Thomas 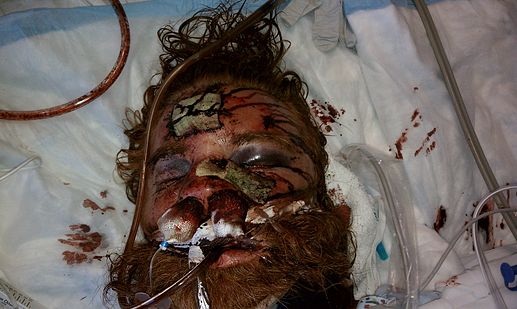 ?¢‚Ç¨?ìI got the end of my Taser and I probably... just started smashing his face to hell?¢‚Ç¨¬ù
A homeless American’s death at the hands of the police

Kelly Thomas died five days after an encounter with the South Californian police. Two officers now stand charged with killing the 37-year-old mentally unstable homeless man. The shock has been widely felt, resulting in local, national and international coverage and debate. Fullerton police officers Ramos and Cicinelli stopped Thomas on Tuesday 5 July 2011. They found him at the local bus depot, where they suspected him of breaking into cars. Thomas refused to give his name and seemed confused by their instructions.

The fatal altercation was captured in grainy black and white by the bus depot’s surveillance cameras, the officers’ radio mikes picked up the audio. This footage was screened for the first time on 7 May, during the preliminary hearing in Orange County Superior Court.

Thomas’s audible submission and repeated apologies, screams, pleas and cries for help, shocked and chilled the packed courthouse. The tape caused such a reaction that it had to be stopped while Judge Walter Schwarz asked people to compose themselves.

The video shows Ramos snapping on latex gloves, raising his fists and telling Thomas: “You see my fists? They’re getting ready to f*** you up.” Thomas goes to run, before being tackled to the ground. Thomas apologises repeatedly and tells them: “Please, I can’t breath.” The officers continuously instruct him to put his hands behind his back and stop resisting. Reinforcements - a further four officers - soon join in, the sound of a Taser is heard over Thomas’s screams, as they pile on top of him.

Thomas shouts for his father and cries “Help me” one last time before falling terminally silent. Ambulance staff remove him from the scene and the officers stand around talking. Cicinelli tells a fellow officer: “We ran out of options, so I got the end of my Taser and I probably... just started smashing his face to hell.”

Thomas died in hospital five days later, without regaining consciousness. The coroner’s office found that he died from compression to his chest, which inhibited his breathing and deprived his brain of oxygen. Facial injuries resulting from his encounter with the police were also cited. The autopsy showed a number of cracked ribs and multiple broken bones in Thomas’s face.

Officer Manuel Ramos, who is 38 and has served with the Fullerton police for ten years, has been charged with second-degree murder and involuntary manslaughter. He could face 15 years to life in prison if found guilty.

Corporal Jay Cicinelli is 40. He was charged with involuntary manslaughter and use of excessive force. If convicted he could be imprisoned for up to four years. The other four officers have not been charged, but they have been on paid administrative leave since 2 August 2011. The prosecution, Orange County district attorney Tony Rackauckas, told the court that Thomas was justifiably terrified by Ramos’s threatening behaviour, he said: “You’re going to fight or flee because this is an imminent threat of a serious beating by a police officer who is there with a baton and a gun and other police officers.”

The defence argued that Thomas was resisting arrest and refusing to give his name, so the police were justified, trained and authorised to use necessary force. America has been shaken by the alleged police brutality. A mobile phone recording of the altercation went viral shortly after the incident, attracting over a million views. But it wasn’t until the 33-minute CCTV footage was screened for the first time in court, that the full horror was apparent.

The FBI is investigating the possible violation of Kelly Thomas’s civil rights. If this were to be the case, the FBI would alert the US Department of Justice, and federal prosecutors would have to make a decision about resulting charges.

The public response to Thomas’s death has been impassioned and loud. The “Justice for Kelly Thomas” campaign has brought hundreds of protestors to the streets outside the Fullerton Police Department. Calls for the Police Chief Michael Sellers to stand down, likely resulted in his retirement after extended medical leave.

The Fullerton Task Force on Homelessness was created in response to Thomas’s death. It aims to support the city’s homeless community with shelters and supported housing, and provide education and guidance for the Fullerton Police Department.

It is hoped that the tragic events surrounding Kelly Thomas’s death, will result in systemic change to police training and homeless services in America.

< The internet cafes of London Street papers to go digital >