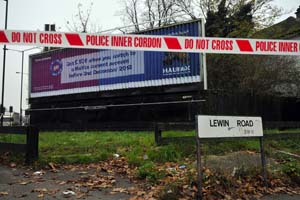 A fire that claimed the lives of three rough sleepers in Streatham, London, earlier this month remains under investigation by local police and fire services.

The bodies of one man and one woman – both believed to be Polish – were found in the early hours of 15 December by the fire service but are yet to be formally identified.

A 54-year-old Polish man was admitted to hospital with burns and smoke inhalation but later died from his injuries. Police said there have been “no further developments on the case” but expect confirmation of the victims’ identities during the course of next week.

The blaze took place on a small patch of wasteland off Streatham High Road at the junction with Lewin Road. It was believed to have been started by a small camp fire.

Locals say the spot was often occupied by a number of homeless Polish people. Amanda Addo, the director of local homeless day centre Spires, has paid tribute to the three victims, who she says were frequent visitors of the centre on Tooting Bec Road. She said: “We were completely shocked. This was a tragic and completely unnecessary waste of life.

“The three victims were very well known to us, both friends and staff were devastated.

“Having supported them at Spires for a few months we will miss them and our thoughts are with their families so far away.

“Nobody should die on the streets.”