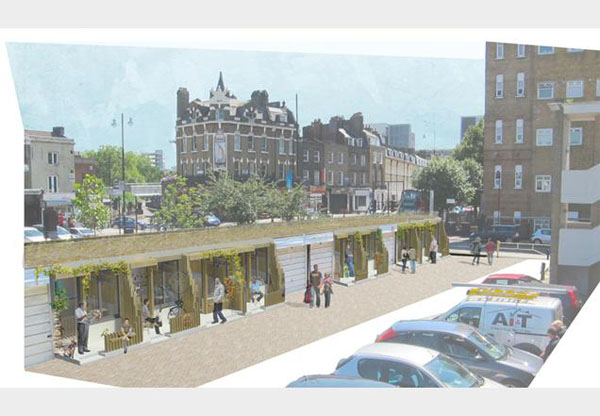 A bold new proposal from the Building Trust could see parking garages turned into prefab flats for the homeless.

In a pilot scheme developed with Hackney council, London-based architects Levitt Bernstein want to turn disused lock-up garages into bedsits, containing a bedroom and shower room with a communal laundry in every fifth garage.

As you might expect, the completed properties will not be spacious. The plans allow for an 11.5 square metre bedsit in each garage – equal to most council’s allowed minimum for a bedsit, but a lot less than the average one bedroom flat size, which is 46 sq m.

The size has been criticised by the Royal Institute of British Architects, who said in a recent report that these 46 sq m flats were “shameful shoebox homes”.

Despite this, the Building Trust’s founding partner David Cole told the Guardian that “the thinking is that it is far better to give someone their own space with their own front door than put them into shared accommodation,” he said.

“The new government guidelines will emphasise shared housing, but this often only instills the problems. This is a steppingstone housing project, allowing people to get back on the ladder.”

If the plans go ahead, these “pop-up homes” would be created as kits that could be assembled on different sites by their future occupants as part of an apprenticeship scheme. If the site was later redeveloped, the kits could be packed away and moved elsewhere. Rent would be £50 per month, plus utilities.

The project has the backing of homeless charities like Crash and YMCA – but concerns remain over whether turning the lock up garages of already deprived council blocks into barrack-like bedsits would be the most effective helping hand for the homeless.

< Moving them out of area Coffin carried through Totnes >