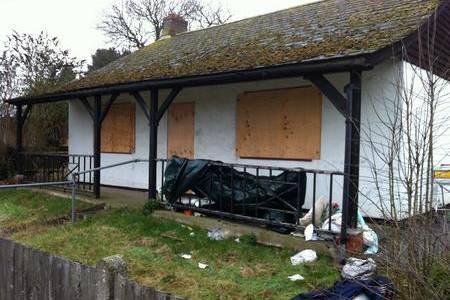 The death of a homeless man on the doorstep of an empty home (pictured) has been blamed on new anti-squatting legislation by campaigners.

Daniel Gauntlett, 35, died while sleeping outside a bungalow in Aylesford, Kent, on a bitterly cold night during February, when temperatures dropped to -2°.

Gauntlett’s body was found the next morning by a passer-by who noticed him from the pavement. An inquest confirmed that his death was caused by hypothermia. Police had reportedly been called on a previous occasion when Gauntlett had tried to get inside the house, which was boarded up.

Since September, it has been a crime punishable by a £5,000 fine or six months in prison to squat in a residential property. Previously such squatting was a civil rather than a criminal matter.

A local resident told the Kent Messenger that Gauntlett was a familiar face in the area. “He used to ask for money but not for drink,” the resident said. “He used to buy pasties from the supermarket. It was so sad. Especially when the houses are empty.”

In response, campaigners have set up a website called “Is Mike Weatherly MP Dead Yet”. The website claims that because the Hove MP helped to introduce new anti-squatting legislation, he is “personally responsible for the death of Daniel and all other poor and homeless people who will die as a result of this disastrous legislation.”

Responding to the website, Weatherly said: “A typical squatter is middle-class, web-savvy, legally minded, university-educated and, most importantly, society-hating.

“If squatters really cared about the homeless then they would help them access council services, not scare them into believing that they would be arrested.”

However, Squatters’ Action for Secure Homes (Squash), a group formed to campaign against the legislation, has written an open letter rejecting Weatherly’s claim that squatters were largely middle class, pointing to research carried out by Crisis which showed that 40 per cent of single homeless people had squatted.

The Squash letter added: “If the typical squatter were society hating [..] they may well be justified in hating a society that has allowed a homeless man to freeze to death on the steps of an empty home.

“Squash will continue to campaign against the bigotry and myths perpetuated by Weatherley and the mainstream media about squatting.”