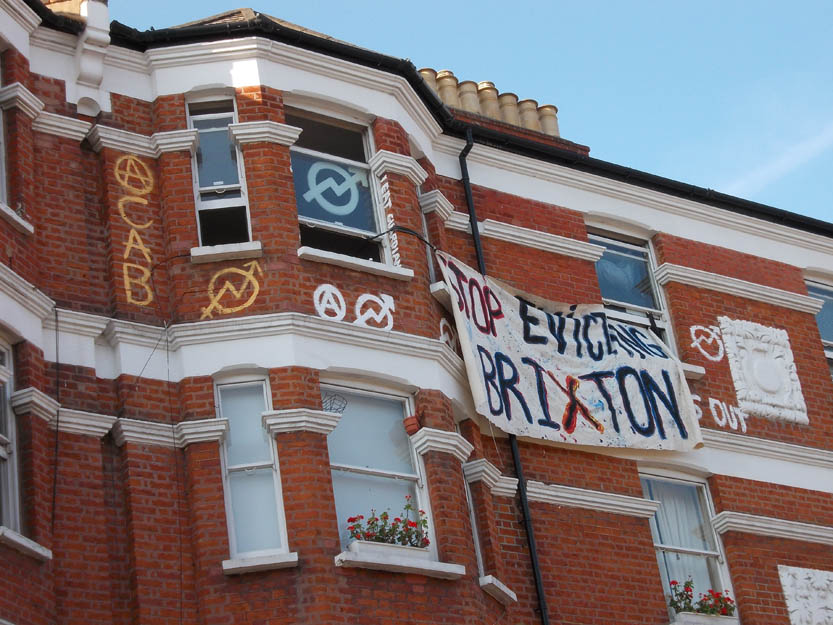 ¬© Indymedia.
Seventy-five evicted from six blocks of flats, some of which were occupied for up to 32 years.

Police and bailiffs evicted 75 squatters from six blocks of flats in Brixton, South London, last month, some of which were occupied for up to 32 years.

Police blocked off the area in Rushcroft Road in the early hours of 16 July, before bailiffs stormed the blocks to remove residents, including young children, from the 37 flats. Protesters gathered in support, waving banners, blocking roads or lighting fires in bins.

The properties were some of the last ‘shortlife’ housing co-operatives in London, most of which were purchased by councils in the 1970s and earmarked for refurbishment. When funds were no longer forthcoming, they allowed people to live in them paying little or no rent.

However, for the last two years Lambeth Council has been trying to remove the squatters, to raise revenue to improve housing standards across the borough. It is understood that three of the buildings have been sold to developers for an estimated £5.5 million, with individual flats in the street fetching close to £500,000.

The remaining flats will be reserved as social rented housing, according to the council. However, residents and their supporters accused the council, which claims to have co-operative principles, of putting profit over the people of Brixton.

One of those evicted, Peter Piotrkowski, who was on crutches, claimed he fell over when police pushed him.

He told the London Evening Standard: “I was moving slowly because I can’t run and they pushed me twice. I’m going to be homeless now. I’m on benefits, £72 a week. I can’t find any place for that money and I need to keep some money for food.”

However, Lambeth councillor Pete Robbins said: “It is unfair on the thousands of residents in need of housing in Lambeth that a small minority are unlawfully squatting in six mansion blocks and not paying any rent or council tax.”