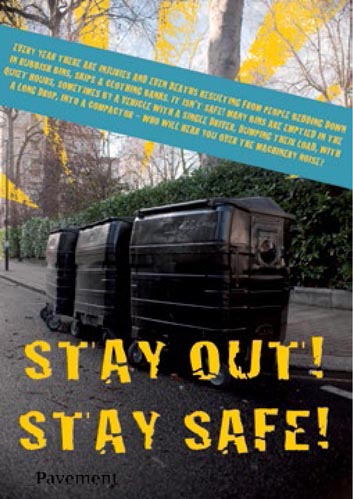 This year’s wet and cold winter is driving rough sleepers to put their lives at risk by sleeping in bins, new research shows.

One in five waste management workers surveyed said that they had found someone sleeping in a bin over the last year. Almost half of the people found were only discovered once the process of emptying the bin had started – two out of five were discovered when the bin was lifted, but almost one in six was only found when they were tipped out, narrowly missing serious injury or death.

The majority were sheltering in large 1,100-litre bins which had been left unlocked at the rear or side of commercial buildings. These bins are picked up and emptied mechanically rather than by hand, increasing the chances of a sleeper going unnoticed until they are tipped out. Three-quarters were found during bad weather.

Two-thirds of waste management companies surveyed did not have a formal policy for checking bins prior to emptying them.

The new research, a response to a series of near misses and fatalities across the waste industry, was carried out by the Chartered Institution of Wastes Management, waste and recycling company Biffa, and rough sleeping service StreetLink. Almost 200 waste management organisations were surveyed during the study.

Director of StreetLink Matt Harrison said: "People who sleep rough have difficult choices to make, and sheltering in a bin can seem like a safe, dry place to spend the night. However, when the bin is emptied, all too often people are still inside and their lives become immediately at risk”.

“This study shows the lengths to which individuals will go to find shelter, especially in bad weather. Anyone who has to seek shelter in a bin, is one individual too many and we must act now to help prevent future deaths.”

Former rough sleeper Paul Wilson, said: “People who sleep on the streets are often incredibly vulnerable and will find any shelter they can to help feel protected. I know from my time rough sleeping that it’s incredibly difficult to sleep out when it’s cold and raining, particularly in winter.

“It's imperative that both rough sleepers and waste management workers are educated to ensure no further deaths or injuries occur.”