In focus: The Samaritans 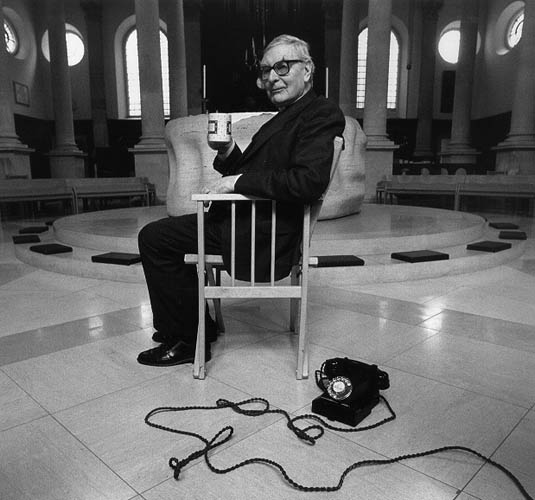 Chad Varah: "a man willing to listen, with a base and an emergency telephone”
More than a third of homeless adults have attempted suicide. So it’s important that the Samaritans makes its presence felt.

More than a third of homeless adults have attempted suicide. So it’s important that the Samaritans makes its presence felt.

It was the world’s first telephone helpline, intended to serve as a “999 for the suicidal”. The Samaritans was founded in 1953 in London by vicar Chad Varah, who described himself as "a man willing to listen, with a base and an emergency telephone”.

It’s moved on a bit over the years – though the charity has stayed true to its guiding principles of confidentiality and non-judgmental support it now has over 20,000 volunteers at some 201 branches across the UK. Its aim is clear: to support anyone in distress, 24 hours a day, seven days a week. The charity’s work to reduce suicide is as important and vital as ever – particularly in the homeless population.

“Suicide is high among homeless people,” says Colin Stuart, a volunteer from Ipswich Samaritans, which offers help at its local soup kitchen, as well as emotional support to the guests there.

“That’s not to say their problems are just about not having a place to call home. It still could be relationship problems... all sorts of things that we get people phoning us about all the time.”

It is widely recognised that being homeless makes you more vulnerable to suicidal thoughts. A 2011 Crisis report found that homeless people are over nine times more likely to commit suicide than the general population. The figures paint a stark picture, and one that the charity wants to change – by encouraging people to talk.

This July sees the launch of the charity’s annual National Awareness Campaign, 'Talk To Us'. Members across the UK will be holding events and popping up in local towns and cities to “let people know that we are here for them, round the clock, and that they can come to us knowing that we provide a safe space for them to talk and be themselves.”

This isn’t the first time Samaritans has taken its message to the streets. Volunteers from Central London Samaritans regularly visit soup runs in Central London to offer emotional support. Northampton Samaritans visit the local Hope Centre every Thursday morning. And in Ipswich, Wednesday evenings are spent at the Salvation Army’s soup kitchen.

Samaritans can also be found visiting probation hostels, prisons and even festivals. “We’re quite pro-active. We don’t just sit there waiting for them to come up: we go and talk to people and ask them how they’re feeling and just support them emotionally,” says Colin.

“We’re now about getting out into the community and talking to people in their own environment. We do find that they tend to open up a little bit more.” For some people, it’s just about giving them the Samaritans’ phone number, email address or nearest branch address, so they can get in touch in their own time, pulling out that number when they need it most.

And that’s just what David Sidwell did. “I think the first time I contacted Samaritans was just before Christmas 2008,” he remembers. “I’d been signed off work with stress and then they dismissed me for being off sick, so I was basically out of work. Every time I tried finding work, everyone was always like ‘Well, what have you been doing for the last 12 months?’ I explained ‘I’ve been unemployed because of health problems’ and I think then they don’t want to look at you for a job either, which made it even more difficult.”

David was having counselling at the time through his local hospital and his counsellor gave him the number for Samaritans, saying to call if he was ever in crisis and needed to talk to someone. “And it just so happened that one day I did!” says David. “The first time I rang I actually hung up, then rang back. It was nice to just be able to talk to someone who didn’t really know your situation – just someone who’s there to listen, which is the thing that helps the most. And they just asked me questions about what I did, what I wanted to do and stuff like that.”

Long-term unemployment had left David’s finances in a “terrible” state, he says. “Because initially I wasn’t unemployed (I was just off sick), I wasn’t able to get benefits other than Statutory Sick Pay, which caused me to get into financial trouble.” At this point many people would have ended up losing their home, but luckily David’s parents owned the house he was living in and were able to be flexible with his rent payments. “I called Samaritans a couple of times over that Christmas and then it was in the New Year that I thought: right. I need to sort something out. That’s when I decided to seriously pursue starting my own business rather than working for somebody else.”

Today David’s catering business has been going for five years and he now employs 17 people.

What was the best thing about Samaritans for him? “They’re non-judgmental. At the end of the day it’s just a pair of ears at the end of the phone. They don’t take what you’re saying personally, they’re just there as someone to talk to.”

The other draw, adds Colin, is it’s confidential: “Whatever someone says to Samaritans will stay within our organisation. It never goes outside... We will only breach confidentiality if somebody threatens us or our organisation in any way or if they happen to go unconscious

[if they’ve taken an overdose, for example].” There’s no waiting list to join, no follow-up appointment, no requirement to provide your personal details or tell your life story. It just begins with one simple question, says Colin: “How are you feeling today?”

For more information on 'Talk To Us' events going on around the UK, visit www.samaritans.org/media-centre/our-campaigns/talk-us/talk-us-events-across-uk-and-ireland.

You can call Samaritans round the clock on 08457 90 90 90 (local branch numbers available online), email jo@samaritans.org or pop into your local branch.

< Handwritten signs of the times My view: staying clean is hard... >