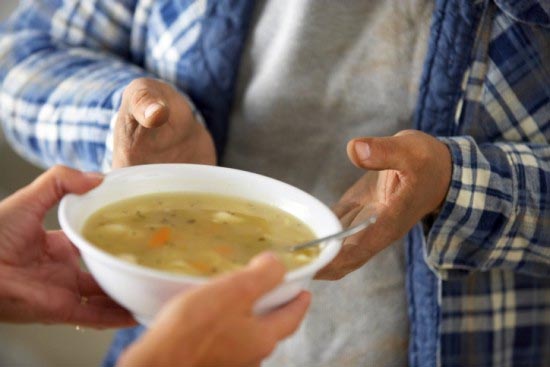 Giving out a bowl of soup may not sound controversial, but it is. (© Creative Commons)
Do they really bring criminality, antisocial behaviour and filth in their wake, or are they a necessity for people without a safety net?

Some see soup runs as a good thing. Others claim giving people handouts keeps them homeless, damaging their health and life chances. Emdad Rahman, journalist and soup kitchen volunteer, went out to find out what the fuss is all about.

The words “soup kitchen” bring to mind older times – a necessity in a pre-welfare state for those who fell through the gaps. The first soup kitchens date back to the late 18th century, so surely by now we’ve worked out how to keep everyone fed? But as many of you will know only too well, soup kitchens remain very relevant today.

As benefits are slashed, and people find themselves sanctioned, it’s not just food banks people are falling back on; a Scottish Government report found nearly five times as many people used both food banks and soup kitchens in the six months to September than during the whole of 2011–12. Meanwhile, most soup kitchens up and down the country are themselves are reporting record demand on their services.

Yet, believe or not, there is a lot of controversy surrounding soup kitchens in Britain. The majority of the wider public view soup runs as a godsend, a lifeline and support for some of the most vulnerable people in our society. It’s certainly a view I hold. When I began volunteering at the Whitechapel Mission one Christmas day morning, what I noticed immediately was that people from all walks of life were here. Some had lost employment, others were in debt, some suffering from stress – all factors that had led them to need the help of the soup kitchen. You may be one of the thousands who rely on them too.

But some see it differently. Many of the big charities believe that they are not helpful as they help entrench people in a homeless lifestyle. If you know you can get food on the street, you’re less likely to move on with your life, so the argument goes.

Meanwhile, for many authorities it’s mobile services that prove especially controversial, with critics claiming they attract people to city centre locations, bringing with them criminality and other problems.

No matter that research from Shelter showed this was not the case, some councils have longstanding concerns. In 2011, Westminster backed down – under pressure – on plans to ban soup runs entirely from the borough, but some soup run organisers claim they remain hostile.

Soup kitchens in many areas report that they are under attack. Earlier this year, the Christian Kitchen, which had been served notice by the council to move from its central location, won a judicial review which allows it to stay put for the time being.

Last month, Bournemouth Borough Council told Anastasia Wells at the Street Light soup kitchen which feeds up to 150 people a week, that foods could not be handed out as it could attract antisocial behaviour. The Council’s Community Safety manager, Andrew Williams, says: “We are working with Street Light to find an alternative and more appropriate location for the soup kitchen. We are particularly concerned for the safety of both residents and tourists who use the gardens who are currently impacted by its presence, especially those trying to access the toilet facilities and the potential for antisocial behaviour.”

Stratford City in East London seems well-heeled on the surface. But it does not seem so affluent once you realise that 50–80 people sleep rough at night. One Third is a local group of volunteers who run a soup kitchen. Group leader Kaiser Raja told The Pavement: “These are essential services for some of our most helpless and vulnerable fellow citizens.

“We run a small kitchen on Friday and Saturday evening every week. Judging by the number of visitors who are hungry and sleeping rough, we are very popular with the masses. We receive absolutely no government funding and the kitchen runs on the good will and big hearts of our volunteers and members of the public who donate their time and money.”

Kaiser has strong words for the sofa pundits who take potshots: “Excellent services like ours are amazing resources and I have just one thing to say to those who say we pander to poor work shy attitudes: come and spend one hour in the presence of our volunteers and service users and see if your attitude doesn’t change.”

Amanda (who didn’t want to give her surname) is a regular guest at the One Third soup kitchen: “I pop along every Saturday to meet the team and have a chat,” she says. “I am homeless and have a baby. My father helps out as much as he can. My partner had to move away from London as his grandmother is terminally ill. I don’t have much money to eat healthily and pay the bills.”

She is clear about what this particular soup kitchen provides: “One Third are heaven-sent. This soup kitchen provides me with a hot meal and great company. The volunteers are very friendly and I forget about all my troubles for a couple of hours when I’m with them. Thank God they’re around because if they weren’t, I wouldn’t expect the government to help me out.”

Having been involved in the homeless sector for over 10 years, Jamie Nalton, interim manager of the London Simon Community, has passionate views to share: “Soup kitchens are absolutely necessary. They are independent services and a whole lot more than just food.

“Soup kitchens are where you can be yourself, meet people and enjoy a few moments where you can forget about the harshness of life.”

So while homelessness, benefit sanctions and poverty remain issues in Britain, it looks like soup kitchens will be staying.

Do soup runs provide an important service? Tell us what you think.

Find out where you can get help: thepavement.org.uk/services.php