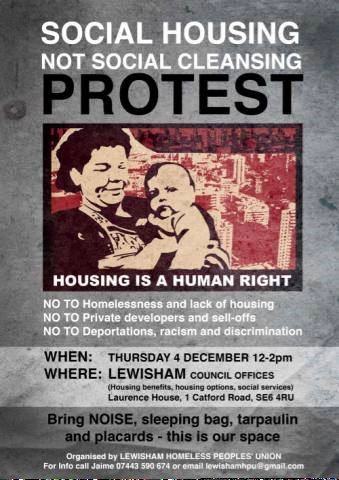 Poster for the protest this month
London could soon become “the preserve of the super-rich”, the National Housing Federation has warned

London could soon become “the preserve of the super-rich”, warned the National Housing Federation in a new report last month.

The study – Broken Market, Broken Dreams – claims there is a growing inequality between the capital, where house prices rose by almost a third, and the rest of the country. The equity gap is said to be affecting social and affordable housing, with less and less available in London. But those without housing won't leave the capital without a fight.

In recent months there has been a growing sense of disquiet around the issue in London – from boroughs like Newham, where the Focus E15 Mothers have caused a media storm, to places like the southeast borough of Lewisham where protest action calling for “social housing, not social cleansing” is planned in December by Lewisham Homeless People’s Union (LHPU)

“I’d seen lots of action going on in Lewisham – campaign building, information gathering, networking,” says Jamie Mills, who was inspired to set up the LHPU after meeting E15 mothers and by her own “horrific” housing experiences when she was pregnant, “but I thought we needed to demonstrate our collectiveness.”

Jamie has also noticed more people like herself being pushed into action: “Where it’s becoming more visible, people are realising they’re not the only ones in the same boat. Homelessness and overcrowding and anxiety at home are such huge issues – and are now affected the middle classes too.”

Despite the numerous tower blocks that have sprung up in the past year or so in central Lewisham, affordable housing is in short supply. The council has been accused of failing to meet its goal of 35 per cent affordable housing in all new developments.

With 400 families currently in emergency temporary accommodation in the borough, it also revealed plans for “one of the UK’s first ever ‘pop-up’ villages, providing temporary homes for 24 families and space for retail, commercial and civic use”. Contracts are due to be awarded in early 2015.