A different kind of brew 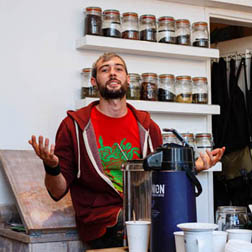 A staff member © James Bellorini
As a new recovery café opens up in London, we find out why demand is so high


Liisa, from Finland, who works for East London addictions charity SCT, has been in recovery for a year and a half. But when it comes to having a night out, she says it’s tricky to find places where alcohol is not involved.

“For me, it’s not even that I’m so bothered about having alcohol around me, but everybody’s asking ‘Why are you not drinking?’,” she says. “Having to have that conversation all the time is so tiring.”

So Liisa and the team behind East London charity SCT decided to do something about it and opened up their social enterprise café Paper & Cup on a Wednesday night to give those in recovery a safe, warm and alcohol-free place to come of an evening. The after-hours opening began in September and now 20–25 men and women come every week, attracted by the cosy atmosphere and relatively cheap hot drinks – filter coffee is 50p.

Located just off London’s Shoreditch High Street and counting Russell Brand as a regular, it’s an odd location for an abstinent charity, as Community Engagement Development Manager Brent Clark admits: “On a Friday night, the high street is bedlam. But this turns on its head this thing of people going out to countryside [for rehab]. If you get clean where you live and build up a sense of community and belonging where you live, I think you’re more likely to sustain your recovery.”

Walking into Paper & Cup on a Wednesday evening, the atmosphere is exactly the same as during the daytime. Music plays on the speakers and people sit chatting, playing board games or sitting quietly in their own company as the coffee machine splutters into action. “It’s different from therapy group or meetings,” says Liisa. “You can find people to talk to but you don’t need to come with the mind that you’re attending a therapy group ... it’s much less emotionally involved. It feels normal.”

Like most of its customers, all of the café’s round-the-week staff are in recovery too. “I’ve been a barista here for about a year,” says Hollie. “It’s my little haven, my little bolthole. It’s where I feel comfortable.”

Having people in recovery on the frontline is crucial, says Brent: “It’s a really great opportunity for people to learn a trade and work on the job but still in a recovery environment.” And there’s another reason why this model is so important, says Liisa: “We also want to make recovery a bit more visible: it’s about de-stigmatisation of addiction, so it’s not all behind closed doors.”

“Addiction has got to go through a journey like mental health or cancer have in the last 15 years,” adds Brent. “[We] need to take the shame out of addiction and the disinformation, for people to understand that it is an illness, that people who are addicts are unwell and that they can recover – and need help to recover.”

Edinburgh charity Comas helped set up the Serenity Café in the heart of the Scottish capital. A tentative online survey received more than 100 positive responses after just a week, convincing Ruth Campbell and her team that they were on the right track. They started small, running alcohol- and drug-free club nights, and then other social gatherings. After some time running cafés in rented spaces, they finally moved into their own venue in 2012 and continue to go from strength to strength.

It was hard work though. “We were the first people to do this in Scotland,” remembers Ruth, “so we had a lot of work to do convincing policy makers and so on that this was needed. At first, people would come from all over the UK to learn about what we were doing. And it’s great to see that people have taken things away from that experience and set up their own cafés.

“We found that this was something really important to people. After rehab, people would often become very socially isolated. And social isolation is often the prelude to relapse. What’s more, when people get drugs and alcohol out of their system, they often find there are underlying issues with past trauma or mental health.”

For that reason the café relies on a network of paid staff and volunteers, many of whom form an essential peer network for the customers, who are able to drop in seven days a week for coffee and companionship. They also run activities including art sessions and even training courses. “For some people, it’s as simple as having some structure in their day, somewhere to go,” says Ruth. “One man told us he thought he would never dance again.” Instead he started going to the Serenity Café club nights and stayed drug- and alcohol-free. Ruth is proud to report that he is now a paid worker in a nearby charity.

Others have popped up across the UK, The Dry Umbrella at the Nexus Art Café in Manchester, The Brink in Liverpool, to name just a few. And elsewhere tens, or perhaps hundreds, of temporary “cafes” – sometimes in existing addiction services or community halls, set up shop for a couple of hours each week, providing a safe place to come, a friendly welcome and a readymade recovery community.

Many find out more about other services through the cafes’ informal support networks. At Paper & Cup, customers can find out more about SCT’s “recovery pathway” too. As well as the residential rehab programme for homeless men, there’s the New Hanbury Project’s day programme, with courses in everything from woodwork to Spanish and drop-ins at the adjoining St Leonard’s Church.

Brent has high hopes to extend the cafés’ evening openings. “When services close, weekends and evenings, that’s when people relapse,” says Brent. “My role is to pull it all together and facilitate it, then give it to the service users to run. So at the end of the two years, I should have done myself out of a job – that’s the aim!”

• Some names have been changed


Paper & Cup is open to people in recovery on Wednesday, 7–9pm.

For information on how to get involved with the New Hanbury Project and other SCT activities, contact manager Dawn on 020 7613 5636 or dawn.johnson@sct.org.uk

Recovery cafes, some more developed than others, can be found up and down the country including:

< Pope raffles gifts for charity Birds in the sky >