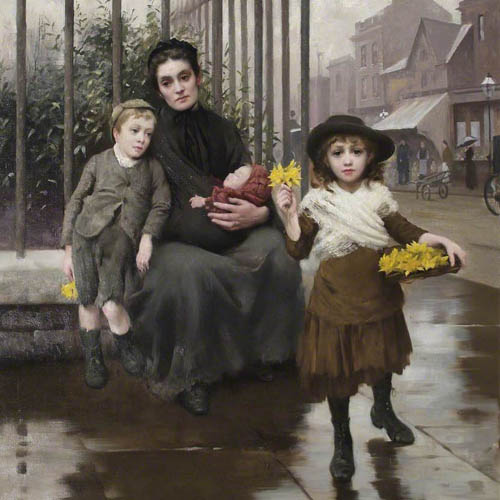 The Pinch of Poverty, by Thomas Benjamin Kennington, oil on canvas, 1891. © Coram in the care of the Foundling Museum
New exhibition of homelessness in London shows how little some things have changed

A new exhibition at London's Geffrye Museum is set to shine light on the hidden lives of homeless people who lived in the capital more than 100 years ago – and raise painful questions about why homeless people are still struggling to find decent places to live today. ‘Homes of the Homeless: Seeking Shelter in Victorian London’, which runs from 24 March to 12 July, will draw together photos and objects dating back as far as 1840 – plus contemporary records – to illustrate the experience of the tens of thousands of people who slept rough or stayed in shelters or lodging houses in Victorian London.

Their tough circumstances means they left behind few personal items, according to curator Hannah Fleming. However, the exhibition features some of the few objects to have survived from the era, including a bottle of carbolic acid and an enamel spittoon owned by homeless Victorians, along with colourful bits of broken pottery excavated from a pit at Gun Street in Spitalfields, which was once the outdoor toilet for a common lodging house. Described in one report included in the exhibition as “extremely filthy and disgusting”, these lodging houses were poorly regarded at the time.

‘Homes of the Homeless’ will also showcase interviews carried out by Salvation Army founder William Booth, who spoke to homeless men during 1890.

One man, sleeping rough on a bench on the Embankment in that year told Booth: “It’s very fair out here of nights, seat’s rather hard, but a bit of waste paper makes it a lot softer. We have women sleep here often, and children too.” There was rarely any trouble, he reported: “We’re too sleepy to make a row.”

Dr Jane Hamlett, one of three history academics whose research into Victorian homelessness has contributed to the exhibition, said: "It tells you a lot about homelessness: "If you were elderly, or ill or a child, then often there was no alternative to going into an institution. You were stuck, and it could be very grim. But some of the able-bodied learned to play the system very well, went into and came out of shelters repeatedly, and some learned a trade and managed to get themselves out of poverty. The experience of the Victorian homeless was far from uniform.”

While the exhibition is ticketed, there’s also a free display ‘Home and Hope’, created by young people with experience of homelessness from the New Horizon Youth Centre. One told a Geffrye researcher: “It seems that all the changes that were being made in a positive way, to try and make things better for homeless people... you know, it’s just going backwards.”