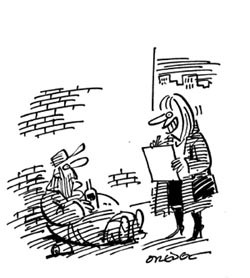 Would you like to take part in a new TV project, 'Celebrity Down and Out'?
A BBC film crew descends on the Chelsea Methodist Church, then vanishes A BBC production on homelessness saw a film crew twice descend on the Chelsea Methodist Church, before vanishing without apparent reason. A few weeks ago, BBC3 documentary producers visited the centre and to ask about the possibility of filming part of their documentaries at the church. The filming took place and included an interview with one of the experts used by producers to monitor the programme. "Since the filming in February I have heard nothing further concerning a screening date despite several attempts to contact the series producer," Steve Braddick, pastoral centre manager, said. The project involved six rich and successful individuals who, stripped of their possessions, would live alongside homeless people and workers for three weeks. Each of the four films would document their journey at various stages of their experience of been homeless. They were to sleep rough, buddy up with rough sleepers, use day centres and night shelters, live and work in hostels, and then meet ex-homeless who have moved into supported housing projects. At the beginning of the programme, the six characters would be placed in six different postcodes in London. In the second part, each of them would be mentored by actual rough sleepers, who would offer them a more authentic homeless experience of living on the streets. According to Mr Braddick, it was at this stage that the filming stopped, at Chelsea Methodist Church, at least. He could only speculate that the filming has been halted for unexpected problems between the real and the 'fake'. As a result, we don't know whether part three of the programme was filmed. Mr Braddick was told that aim of the programme was to change attitudes toward homelessness, raise awareness and dispel the myths surrounding homelessness and homeless people. The series idea was inspired by an American university course called the Urban Plunge, in which students spend 48 hours living and working alongside the homeless and impoverished.
< Complaint against eviction Homeless woman raped >