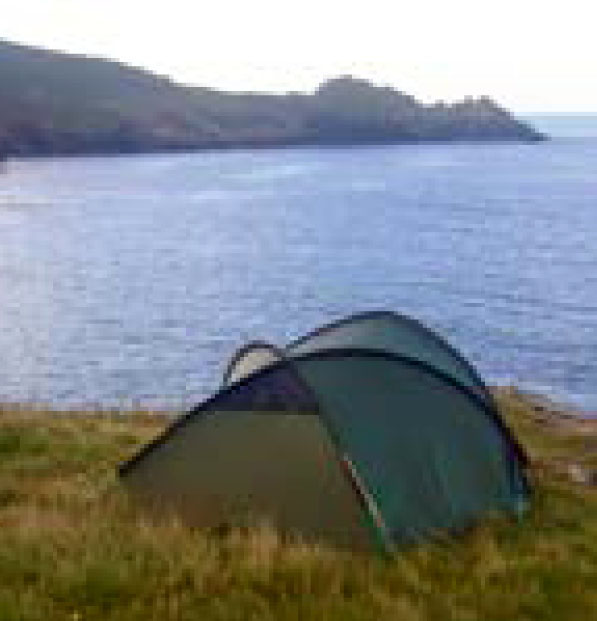 When Raynor Winn and her husband found themselves homeless, they set off to live in the wild. They were far from alone.

When Raynor Winn and her husband found themselves homeless, they packed a tent and set off to live in the wild. And they discovered they were far from alone.

Homeless. It’s a word that rightly conjures up images of despair. But in 2013, I swam with dolphins, walked with a tortoise and slept on the most westerly cliffs in England with only two sheets of nylon between me and America. And strangely I wouldn’t have had those life changing moments if I hadn’t been homeless. Bear with me, though: there is a darker side to this story.

In the same week that my partner was diagnosed with a terminal illness, we were evicted from our home of 20 years. It was an old stone house in the countryside from which we ran our own business. Told by the local authority that we were not entitled to priority housing as my partner "wasn’t ill enough" we made a choice. With nowhere to stay, we packed our rucksacks and headed south to walk the whole 630 miles of the South West Coastal Path.

For us the choice was living wild – wild-camping – and we were lucky enough to have the kit and the resources to do that. But whatever spin we put on it, there was no escaping the fact that we had joined the numbers of the rural homeless.

Over the next two summers we encountered every form of prejudice and help. We also met many other homeless people whose numbers contradict all the official figures. I had thought homelessness was primarily an urban problem and rough sleeping definitely so. After all, who sees a rough sleeper in the countryside? But having camped along side them, I can confirm: the hidden homeless are there, unseen.

The housing charity Shelter suggests 250,000 people are currently homeless in England, though the government doesn’t accept this. From what I encountered in the rural southwest, I believe the figures are much higher than even Shelter’s estimates. The Cornish homeless charity St Petroc’s claim there were 65 rough sleepers in Cornwall in 2015, but few of the homeless people we met had slept on the streets, so had never been part of a head count. Many had never even approached the local authorities, so weren’t included in any statistics.

The South West Coastal Path follows the coast from Somerset, through North Devon, Cornwall, South Devon and into Dorset. Rural always, in places remote, only occasionally passing through urban areas. This is the land of high value housing, second homes, holiday lets and tourists. You wouldn’t risk sleeping in the streets here, where there is so much prejudice. The result is a perception that there is no homeless problem.

In Somerset we encountered occasional rough sleepers miles from anywhere. But in Devon and Cornwall, the numbers grew and grew. We met people sleeping in cars, tents, barns, in caves and under bridges.

One group of around 20 young homeless people congregated in agricultural sheds and horse trailers in a wooded valley, unable to afford to rent in the wealthy area where they all worked. Further south, as gale force winds drove horizontal rain in from the Channel, we were forced inland away from the exposed cliff tops. Camped in a wood, we quickly found we weren’t alone. A ramshackle collection of tents and tarpaulins spread through the trees, invisible from the road. There we met John. Like many we met, he was educated and non-dependent, the oldest member of a group of homeless people who he said numbered "around 30, give or take". He claimed a police campaign to free the streets of rough sleepers ahead of the tourist season meant they had to stay hidden.

The availability of affordable accommodation is cited as the biggest cause of rural homelessness. It’s a countrywide issue in rural areas, where local authority housing stocks are low. Other resources are equally difficult to access, with mental health and addiction support agencies being spread across wide rural areas, meaning it can take days and endless bus journeys to resolve issues. It can be an impossible mountain to climb for many homeless people who, as a result, stay outside the system, hidden and uncounted.

During my time on the coastal path, it became clear that far from the romantic vision of the “gentleman of the road”, rural homelessness is the daily struggle of large numbers of invisible people who are forced to live away from the public gaze, in areas where accessing food can be their highest priority. Unfortunately, before the needs of the rural homeless can be addressed, local authorities and those who live in the countryside must first acknowledge their existence, however unpalatable that may seem in a rural idyll.