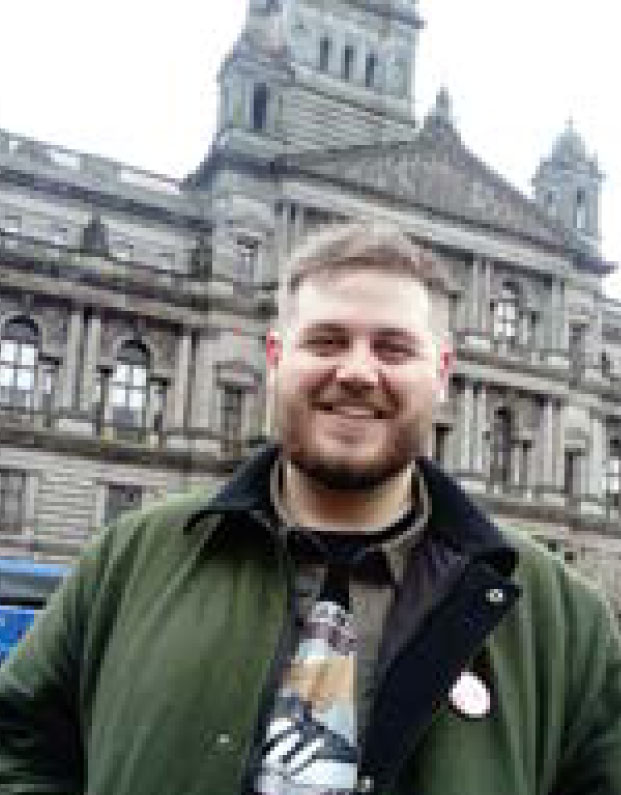 We meet campaigner Sean Baillie, who set up the Homelessness Shames Glasgow campaign

Over the next few issues we’ll meet some of the campaigners trying to highlight the need to end homelessness. Jamie Jackson talks to Sean Baillie, who set up the Homelessness Shames Glasgow campaign

What’s the inspiration for Homelessness Shames Glasgow?
We’re not trained in any sort of help with addiction or other complicated issues that can arise when someone is homeless. But we want to provide solidarity; that’s the one thing nobody else is doing. Everybody else is doing great work. But the scale of it [homelessness]… we can’t just continue to rely on the goodwill of the people that are helping. There needs to be political change. We need to make this a hot topic.

How did you get started?
At the start of the campaign we had demonstrations in the street and a vigil for Matthew [Bloomer, a 28-year-old rough sleeper who died in Glasgow city centre on a freezing night in March]. His death really brought to light the severity of the issue. We all saw what had been going on as we’d all been trying to help beforehand just as a loose group of people – we’d been doing drops of food, sleeping bags and toiletries, and over the winter we’d tried to ask the council to come up with a property, staffed by us, to be used as a daytime drop-in. That idea was totally knocked on the head [by authorities]. But Matthew’s death really spurred us on to say there needs to be something more here, more hard-hitting.

What else have you done?
We made over a dozen banners and dropped them in highly visible places and city landmarks and just made sure everyone in the city seen these. It was well received and picked up by the newspapers. We also campaigned in the run up to the council elections and we made it a big issue for the council election.

We went to Shelter [homeless charity] hustings: there the guy chairing it putting pressure on a Labour councillor asking about our banners. In the future we’d like to a voter registration drive. We’re kicking ourselves that we missed the chance this election. Getting people who are homeless or who have no fixed abode and have them register to vote is so important. Politicians should answer directly to the people.