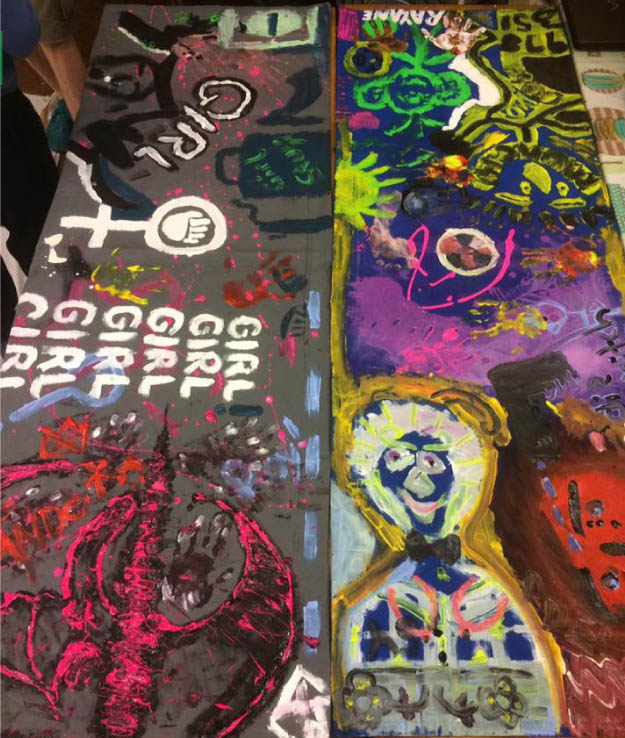 Classic winter shelter beds get a makeover. © Pilion Trust
How a painting and a decorated camp bed helped raise awareness about young people with nowhere to go

How a painting and a decorated camp bed have helped raise awareness about the numbers of young people with nowhere to go.

Every autumn there's a homeless audit that works out how many people are sleeping rough in England. In autumn 2016 it was estimated that 4,134 people were sleeping rough. A year on, rough sleeping seems to be again on the rise, so when the figures of the autumn 2017 audit are published, in January 2018, we'll know for sure.

Meanwhile there could be 80,000 young people facing homelessness in the UK this winter, claims the Pilion Trust. This huge figure is calculated from the numbers of young people growing up in a B&B, sofa surfing with friends and family, or rough sleeping.

But thanks to a painting, House, created by young people staying at the Crash Pad – a London-based winter shelter for 17 to 23-year-olds run by the Pilion Trust – youth homelessness is being talked about across the UK, conversations which include a change of approach by the government to under-21s who now have no access to housing benefit or housing. House, which shows what the group felt a home could be like, is a huge painting which spent 2017 travelling to Cardiff, Edinburgh, Glasgow, Manchester, Leicester, Newcastle and even the Tate Gallery St Ives. Its most recent public appearance was at the One Festival of Homeless Arts exhibition, in Islington. This show was organised by artist David Tovey, who once relied on the Pilion Trust to get him out of homelessness and off crystal meth.

House may give a head's up on homelessness, but it's also a reminder that art can be especially healing whenever you feel down or lonely. Hanging from the ceiling at the show was another talking point – girl and boy canvas beds decorated by Crash Pad residents, made with a nod perhaps to artist Tracey Emin's famous unmade bed.

Another exhibitor at the show, Rosie, became homeless at 15 while she was at school. That's when she learnt the hard way that if you are “single and homeless you are at the bottom of the pile. You have no rights. When I was homeless I had two options on how to get somewhere to sleep and both were not very nice – have sex with someone you didn't want to have sex with, and the other is so horrible I can't even remember.”

Now 34 and with somewhere to live, art is both Rosie's passion and a way to maintain her wellbeing. “I find I can express myself in paintings. Before painting I self-harmed, but painting is brilliant because I'm able to pour myself into it.”

“I did a painting when my brother Tom died, he was about my age now. For about a month I had an experience where I couldn't feel where I ended and the canvas began. It?s a really sad-looking angel, but it's fine art and the best I've ever done. And it got out a lot of bad feelings.”

Rosie also creates beautiful varnished works on newsprint, which she glues on to walls using a homemade glue of flour, sugar and water. And now she has teamed up with filmmaker Jake West, known for horror films such as Razor Blade Smile (1998) and Doghouse (2009), to make a documentary about people pushing back at gentrification in London. “It will show what real life is like for someone at the bottom of our society and how to survive difficult times. So many people I know are told to be 'poor elsewhere' as places are being shut down and turned into things we don't need,” she says.

< On your bike Stories of the streets >