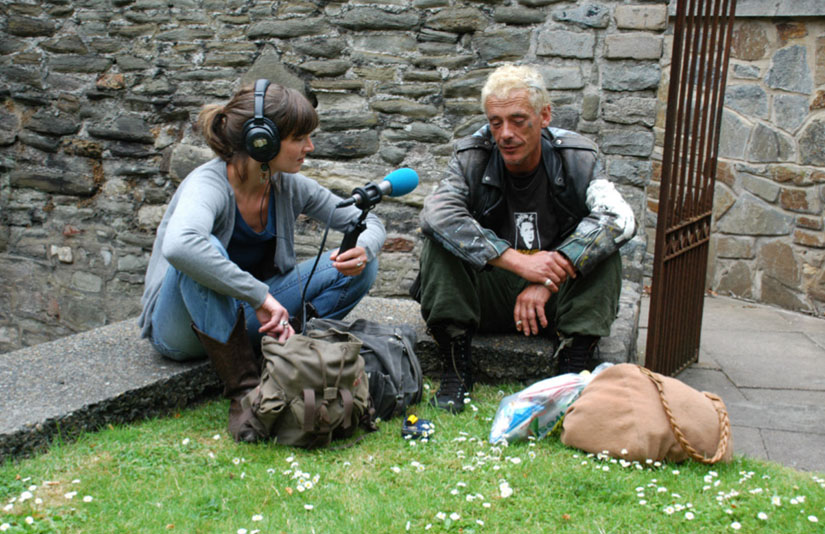 Rachael and Punk Paul record what the Temple Churchyard means to homeless people © John Schofield
What would you say if an Oxford University researcher asked you to try some archaeology techniques where you rough sleep?

What would you say if Oxford University researcher Rachael Kiddey asked you to try some archaeology techniques (such as mapping and digging) where you rough sleep?

They uncovered ceramic, glass and items specifically related to homelessness such as phone cards, portable food packaging and materials associated with drinking and drug use.

“Contemporary archaeology is relatively new,” explains Dr Rachael Kiddey. “You apply the same archaeological principles that you’d use on prehistoric, Roman or medieval sites which tell you something about how people lived. But now you can apply these same methods to contemporary cultures, especially those that you might not know so much about. As archaeologists, we’re used to digging up sites of massacres or battlefields, really dark material.

Working with homeless people as colleagues, we were able to interpret what the materials we found on modern day homeless sites were, what they meant, and how they were used. This showed us some new insights into homelessness.”

Homeless Heritage, the book, was published by Oxford University Press in October 2017. “It is the story of how we did this project,” says Kiddey while on maternity leave from the Pitt Rivers Museum in Oxford. Pre-kids she used to squat and set up community spaces in Bristol.

Over the four-year project, Kiddey explained to the rough sleepers she met that, “I wanted to map and document the city according to you – not Bristol or York city council, or where people like to go shopping. How is each city used by homeless people and which parts do you identify with and why? Tell me your stories. Be my guide. Some said ‘F off’. Some said ‘how can you be an archaeologist if you don’t dig in the ground’? And some said ‘that’s interesting I’ll show you around’. The two latter camps came together. There were about five in the core team and the peripheral project attracted 40–50 people who showed me where they slept, socialised, or why particular places were good to sit (for example, south facing because it’s warmer, or on land where the ownership is dubious).”

“People avoided private steps. They felt they were much better off on council-owned land or spaces that were ambiguous, such as Turbo Island in Bristol. It is the foundations of a bombed out building that became an island when the road was widened. Because it’s not clear who the land is owned by, people don’t get kicked off, so it has become a homeless hub. It’s a place to gather, pass on messages, cadge a cigarette, and have a beer without the police saying you are not allowed to drink. But that’s a catch-22 because homeless people then gather there to use the space, so it becomes known as a homeless place and attracts more attention from the authorities,” added Rachael.

Kiddey hopes her collaboration will help organisations working on homelessness. “If you can design a project where homeless people are given genuine opportunities to direct how it is run, and you are willing to listen to their expert knowledge then you can find pockets of shared humanity, things that unite us all as people.

I thought homeless people would be preoccupied by how cold or wet it was, but instead they talked a lot about what they noticed about a place where they slept and might say they ‘wondered what this old building was’. It was bonding. I also learnt things that helped me to better understand rough sleepers. For example homeless people sleep in the day because at night it’s too dangerous and colder.”

“We’re used to thinking of nice castles, country houses and artwork as cultural heritage, but heritage is relationships between people, places and things that mean something to you as a person,” explains Kiddey.

“The power of cultural heritage is that you can explain what your world looks like and you can listen to what someone else’s is like. It’s accessible to everyone, regardless of their background or class, and that’s very empowering.”

With thanks to Andrew, Annie and Jane, and several colleagues who sadly died during Rachael’s project, including Dan, Ray and Punk Paul.

For four years 40+ homeless people worked with archaeologists and university students in Bristol and York.

They weren’t looking for old items like on TV’s Time Team.

The digs were to look for items that reveal information about people now.

< One brick at a time I will survive >