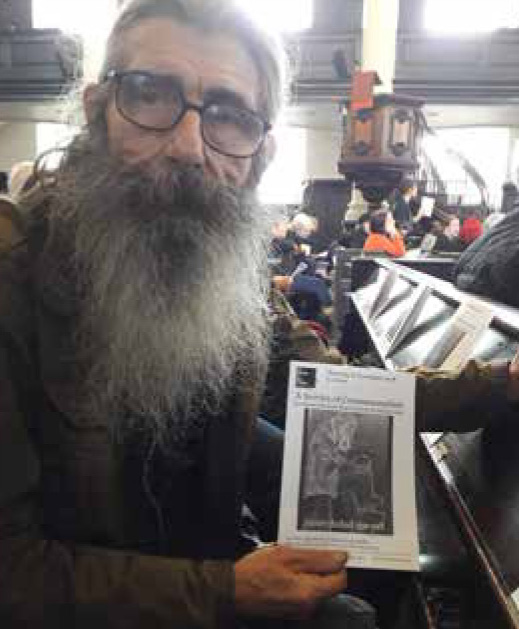 Never failed me yet: It took half an hour to read out the names of all the people who’ve died this year in London while homeless or insecurely housed at the November 2018 Service of Commemoration. The final list was 165, up yet again (in 2017 it was 70). Photo is of Don Pollard, at St Martinin- the-Fields, whose art was used for the service sheet. The national press ignored this story, focusing instead on Brexit resignations. © the Pavement
Grinch-y landlords, (yet) more people homeless, unsupported homeless youngsters and more...

A new year, and new hope that the draconian Public Spaces Protection Order (PSPO) will be reformed, or even scrapped. Under the PSPO police can fine anybody found blocking doorways, asking for money or generally loitering. Arguing this unfairly targets homeless people, Sarah Ward, who lives in Poole, reached a fundraising target for legal costs in November, and will take Bournemouth, Christchurch and Poole council to the High Court in 2020. The human rights group Liberty welcomed Ward’s action, with Lara ten Caten, a lawyer for the group, quoted in the Guardian saying: “PSPOs are blunt powers that are being systematically misused to criminalise homeless people across the country.”

Last November, a report by the youth homelessness charity Centrepoint estimated that 22,250 young people in England would spend the festive period sleeping rough or sofa surfing. No place to stay: Experiences of youth homelessness warned that many 16 to 25-year-olds will find themselves sleeping rough over the winter and many more will be hidden homeless, reliant on sofa surfing to get a bed for the night. Centrepoint arrived at the estimate by analysing data provided by 248 local authorities in England.

Unsafe haven
Vulnerable homeless people in London are being duped by the Home Office as immigration enforcement ramps up deportation, finds the Guardian in October. It revealed that the Home Office was running sessions at safe havens intended to gather information on attendees, in the hope of removing those without valid immigration status. Homeless people attending the sessions are not told that the Home Office is involved. In fact, they are informed attendance could help regularise their immigration status. The Salvation Army, Sikh gurdwara and a Chinese community centre have been caught out offering their space to immigration enforcement.

Billions wasted
Councils continue to rely on emergency temporary accommodation for homeless people, that is routinely found unfit for purpose. In the 12 months to March 2019, councils in England spent £1.1 billion on B&Bs, hostels and other temporary shelter, representing a 78% rise in spending over the preceding five years. This tactless approach to tackling homelessness can place families in dangerous emergency B&Bs, which are of little benefit to anybody other than private landlords’ wallets. Polly Neate, chief executive of homeless charity Shelter, was quoted by the Independent saying the money had been “wasted”.

You're banned
The city of sin – that’s Las Vegas – supposedly welcomes sinners and saints alike. Everybody’s welcome and anything goes, or so the marketing people say. As for people sleeping rough? No thanks. Las Vegas has banned homeless people from sleeping on the street. According to the Washington Post, the law is designed to help maintain the city’s image as an attractive tourist destination.

Freezing change
Intense pressure on Glasgow’s homelessness services resulted in the Glasgow City Mission opening the doors to its Winter Shelter three days earlier than planned, writes Jack Hanington. Glasgow has only one mainstream winter shelter, run by Glasgow City Mission, on behalf of the council and other homelessness services. Following the city council’s transfer of funding to the Housing First plan, homelessness services lost £3 million of council funding, equivalent to 99 temporary beds. As November temperatures dropped to as low as -6C, the decision was taken to open the shelter on 28 November, offering emergency accommodation at the Lodging House Mission on 35 East Campbell Street until 31 March 2020.
< Wheely kind Big thanks:the Pavement at the Guardian >