Deaths on the street 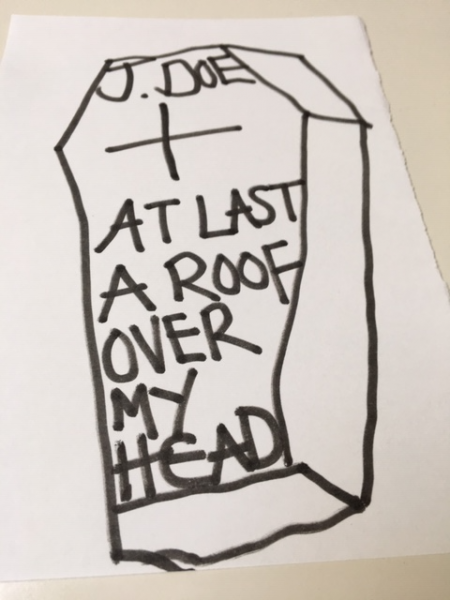 Sadly on a podcast by our Glasgow News Group a man told us: “I’ve been to 15 funerals in the last 18 years. They were all under 40.” © Jean Hindry

A rough sleepers’ guide about dying homeless, by Alastair Murray who has helped run the annual Service of Commemoration at St-Martin-in-the-Fields since 2003

Q: What happens if someone dies homeless on the street? The death needs to be reported as soon as possible to the emergency services (tel: 999), ideally by the person who found the body. The police will normally be the first on the scene alongside paramedics or an ambulance. A cordon will be placed around the body to give dignity and privacy, and to enable police to investigate the scene for any evidence which might help identify the cause of death. The death will also be reported to the local Coroner, and a post mortem is usually required. Local homeless services such as day centres, outreach workers, church and community services should also be informed.

Q: What about the person's family or next of kin? People who have been seen sleeping on the street by outreach workers will usually have some information recorded with local services. In London this would be held on the Combined Homelessness and Information Network (CHAIN) database which records personal details such as name, nicknames, date of birth and contacts with services. This information is not always accurate or complete, but it could be the best available, especially for the difficult task of informing the next of kin. If the person is not known to local outreach workers or other services, perhaps by their own choice, this can make identification and any follow up action more problematic. However, people who've been homeless for any length of time will be known at least to their friends on the street and in the community. It is also worth noting that relationship breakdown is a common feature of homeless people's lives. Respectfully negotiating the wishes and demands of all parties will require considerable tact and sensitivity.

Q: What happens afterwards? Homeless Link recommends that the death of a homeless person should always initiate a review. Were opportunities missed to help this person to move off the streets and into safety? What are the lessons which need to be learned to prevent something similar happening again? In the case of serious shortcomings in services, which might have prevented the death, this might take the form of a Safeguarding Adult Review.

Q: Funeral, Commemoration, and recording deaths In most cases friends of the person who has died will join with staff of local homeless services and clergy to organise a funeral. Churches will always be sympathetic to a request to hold a funeral, especially if the person who died was known to the church, perhaps having stayed in the night shelter or using the church community drop-in.
In Remembrance Week each year a service is held at St Martinin-the-Fields, commemorating the lives of all who have died homeless in the previous year in London. The most poignant part of the service is always the reading of the long list of names of those who have died, including those who have died on the streets, as well as all the names from the hostels, day centres, outreach teams, health services (especially Great Chapel Street), and church and community shelters. The Bureau of Investigative Journalism (TBIJ), the Museum of Homelessness, Streets Kitchen, the Pavement and Housing Justice, among others, have sought to draw attention to this issue. The year long TBIJ investigation, published in 2018 led Channel 4 News broadcasting a series of reports into homeless deaths. It also prompted the Office of National Statistics to start recording homeless deaths. The Museum of Homelessness now holds the Dying Homeless Project, to record and memorialise each homeless death, including the cause, so that people are not forgotten, and to encourage and provoke change in the system.