Speaking with Scarlett Hanson about her work at Solace, which offers advice and support for women experiencing domestic violence, it is immediately obvious she’s in the right job.

For anyone who has ever hit the bottom and decided to seek help from an outsider, you'll know what a big leap that is. At your most vulnerable it’s vital you put yourself in the hands of someone who understands what you’re going through.

Pity is not the same as empathy gained through lived experience – the former often just adds injury to insult, making a person feel less normal.

It’s the cycle of abuse that means those people who manage to get away before they die in an abusive relationship, are often sufficiently damaged that they never realise the potential for using their experience in a positive way.

Sadly, Scarlett’s lived experience of being in an abusive relationship started when she was just 13. It lasted 14 years until she contacted Solace and was advised to leave the house and take her children to live in a refuge, similar to the one she now works at. With that she ended the relationship and never looked back. In the years since she has grown stronger and as a result, she is a rock for women who need her.

The majority of those women have experienced sexual violence from men they are/were in a relationship with, but there are more unusual cases too. Among these was a Somali woman who came to the UK aged 10. Both parents were perpetrators; subjecting her to female genital mutilation (FGM) and other forms of sexual violence. Then there was the case of a woman who escaped a dangerous cult where she was brainwashed and groomed.

Scarlett tells me many abusive tactics are used. Perpetrators often use forms of abuse they believe they can get away with because it stops short of physical violence. These include verbal abuse; violently smashing things and threats of physical violence; violence towards animals; pressuring women into sex or jumping on them when they’re asleep.

Believing what their abusers repeatedly tell them, women often feel they can’t report domestic violence under such circumstances.

Many women on the street escape inclusion in statistics about domestic violence because they are picked up by gang members promising food and shelter in exchange for legitimate employment, but instead are violently forced to work as mules, prostitutes and other illegal jobs. People traffickers use similar methods.

Another tactic used by abusers is to victimise themselves and pretend the abuse is the other way around. For example, in court cases where child custody is concerned there is a lot of manipulation by abusers involving social service professionals – things like bogus reports about the alleged incapacity of a parent – which leads to so-called secondary abuse where professionals disbelieve accounts by the abused party. Obviously, this can lead an already vulnerable woman to feeling helpless.

Among Scarlett’s cases are women with drug and alcohol misuse issues and those with no recourse to public funds who she is supporting while they apply for British Citizenship.

Healing trauma
The root of many problems is often trauma. To recover, you will need to use a wide range of services and a holistic approach. Aim for:
1. Housing (ie, a place to live so that then you can work on any other issues such as alcohol and substance abuse, violence)
2. Peer mentoring (a good friend)
3. Personal budgets so you are in charge of your spending.

What is a refuge?
Info from solacewomensaid.org
• A refuge is a safe place for women and children experiencing domestic abuse.
• Refuge addresses are confidential. Buildings have added security.
• Refuges offer short-term crisis accommodation. Expect to stay for around six months.
• A key worker supports you during your time at the refuge.
• Rent for a refuge place can be high, but your key worker will support you to apply for housing benefit to help cover costs.
• You can find a refuge space if you call Solace Advice Line on 0808 802 5565 from Monday – Friday 10am-4pm.
Or for 24- hour support call the National Domestic Violence Helpline on 0808 2000 247. 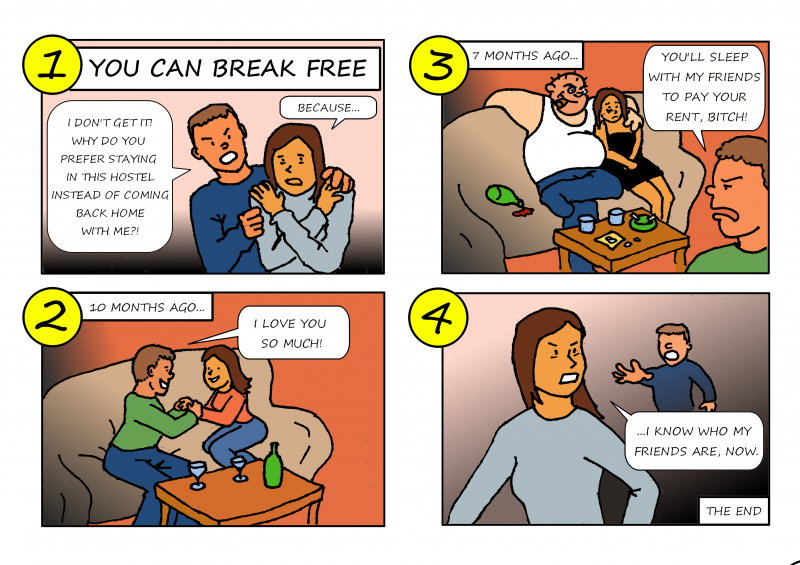