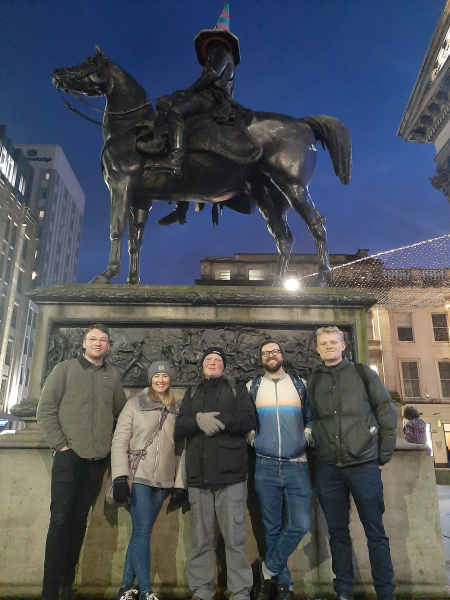 Tours by Invisible Cities are with guides who love to show off their city, cracks and all. Report by Jack Hanington

Daniel Collins is 45 minutes early to his tour as usual. He has become a familiar face at the People’s Palace on Glasgow Green, the start for his tour of Glasgow’s underbelly, entitled Crime and Punishment in the Merchant City. The tour is part of a UK-wide social enterprise, called Invisible Cities, which trains people with experience of homelessness to conduct tours of the places they know best.

“I grew up in Glasgow, I think it comes out in my tour that I’m passionate about this brilliant city, even though it’s shit!” says Daniel.

After growing up with troubles at home, Daniel was homeless at the age of 16. He spent time in and out of hostels and emergency accommodation, then he started taking heroin and became addicted. The cycle of drugs, gambling and homelessness has lasted most of his life but now he is using his experiences to educate people about the seldom-told stories of Glasgow’s past and present.

Zakia Moulani, the social enterprise’s founder says, “The concept of Invisible Cities is that we show the invisible side of places on our tours: homelessness, social projects… but also parts of the history and local life that are invisible to many people.”

Stories of closed-down hostels and old drug pick-up spots are fascinating interjections between the historical tales of crime and punishment. An open-top bus tour goes by in the background. You can imagine the typical sanitised pre-recorded commentary coming through the headphones. Meanwhile Daniel leads us round the former courts on Crown Street, Wilson Street and St Andrews Street whose beautiful buildings were left abandoned last century. Byres Road where he sold copies of the Big Issue and played the role of agony uncle for West Enders on their way to work. “Selling the Big Issue really helped me, because you have to learn how to deal with people. Just like on the tour as well.”

Daniel tells us of the great Paisley Union Bank robbery of 1811 as well as his own experience of being “the worst shoplifter in the world”, then spending time in jail for stealing a block of cheese when he was too skint to buy food. With the support of the Big Issue and Invisible Cities, along with his own determination to get clean and get into work, Daniel has fought to challenge the misconceptions around being homeless. “I’ve seen stories of ‘fake homelessness’ going around. If somebody came on my tour I’d like to think their attitude towards homelessness would have softened a little after the tour.”

Founder Zakia adds, “We challenge the stigma around homelessness by showcasing that it can happen to everyone and that everyone has a different story.”

Want to be a tour guide?

HOW: Founder, Zakia Moulani says: “We recruit guides via a network of local partners: charities and social enterprises. Some tour guides are self-employed. Some are employed for set hours per week. Some prefer to volunteer to figure out what their income could be before taking the plunge.”

< Poem for the Pavement Serene Places >