In pod we trust 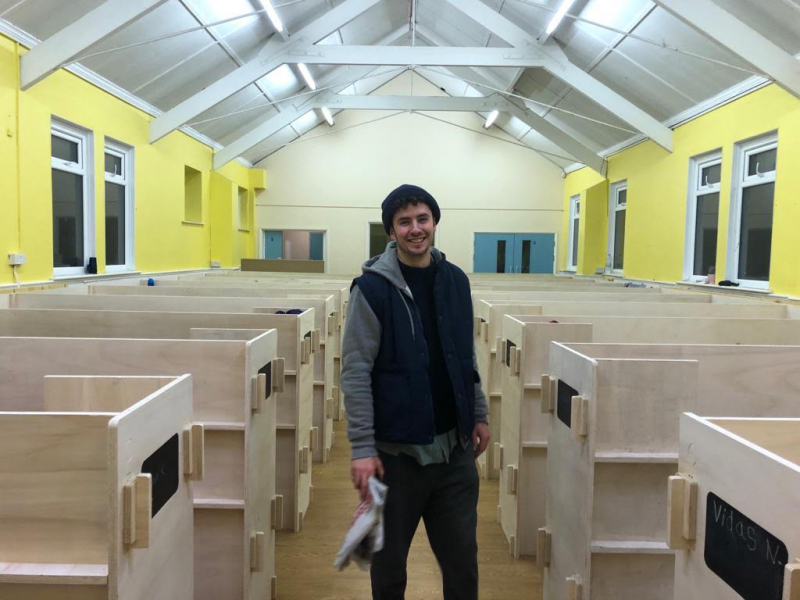 Private pod: Architect George Fisher with his innovative night shelter design. “I do hope within the next few years street homelessness will be eradicated and there will no longer be a use for my pods.” © Jake Cudsi

How can night shelters be made more comfortable? Architect George Fisher talks through his pod solution for Ilford. Interview by Jake Cudsi

Speaking to George Fisher, architecture student and designer of easily assembled ‘pods’ working in a night shelter in Redbridge, Ilford for the 2019-20 winter, the words “dignity”, “privacy” and “comfort” continually resurface. These ideas appear to be the three driving forces behind George’s design – an adaptation of work by Reed Watts Architects.

Soon after the pods were first used the shelter closed for the season. Then, thanks to Covid-19 practically everything closed. But in this new, socially-distanced era some old world ingenuity might provide vital solutions as we embark on the new normal.

The feature that caught George’s eye was the simplicity of the design. The pods are, “essentially cubicles. They’re cut by a machine and they arrive flatpack to whatever shelter requires them”. After his proposal for the Ilford shelter to adopt the design was given the go-ahead, George and the Salvation Army set about drawing up plans and fundraising which, “took the best part of eight months”. Securing the money, happily, was easy enough. £2,000 arrived from the independent charity Commonweal Housing, themselves involved in the original Reed Watts design. The Ilford Salvation Army received £700 from Transport for London, while the panels which make up the pods were donated by timber suppliers Lawsons and James Latham.

Figuring out how to utilise the pods and the space, however, was a more difficult task. George found the original pods took up too much space. “I laid them out in the room and I could only fit a dozen. It would’ve been a big drop.” Considering the capacity of the shelter was more than double that number – 28 people, he wasn’t wrong. Even when his redesign managed to hike the number of pods that could fit in the shelter up to 18, George had lingering doubts. “It brought up this moral dilemma of capacity versus comfort.”

Ultimately, the Salvation Army, according to George, “Wanted to improve the quality of the shelter,” and pressed ahead with his designs. It was the right move. The Ilford Recorder reported “tears of joy” being shed at the upgraded shelter’s big reveal in winter 2019/20. Not that an exhausted George – who’d spent the day fitting the pods – was there to see them. “I said, ‘You know what, I’m tired, I’m just going to go home.’ But I wish I’d stayed because apparently receiving the guests, and them seeing the beds was a magical moment.”

Thanks to Covid-19 the Ilford shelter is unable to open for winter 2020-21, hopefully only a temporary measure as the UK prepares to roll out vaccines. Looking forward, George wants to see his design adopted elsewhere, with fresh plans to further tweak the pods. Already performing an impressive balancing act, with space and comfort competing with cost and capacity, George wants a redesign to be “scaled up”. But he adds, “I’m not necessarily going to make the pods bigger,” he says. Rather, the new pods will be “easily manufactured and quickly installed.”

There won’t be any shortage of interest in (nor, depressingly, a need for) the new designs. His previous adaptation had interest from shelters elsewhere in England, as well as international interest from America and the Netherlands. While welcoming the attention from overseas, George, quite uniquely for an architect, hopes to one day soon see his designs become obsolete.
Until then George is busy re-designing the pods to make them more affordable to night shelters.