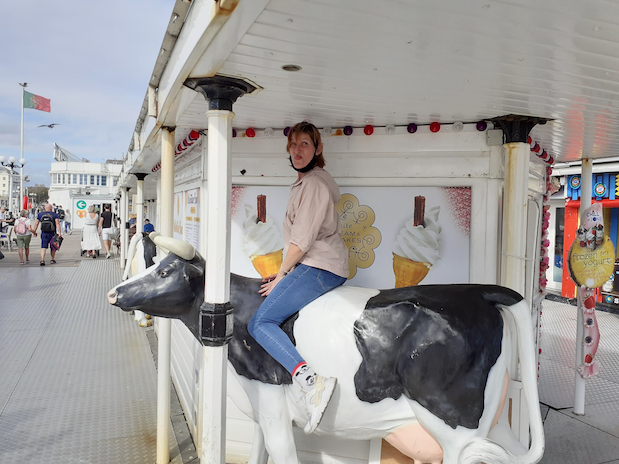 A change is as good as a rest. Hostel-resident Ashley wrote six pages about her day trip to Brighton. Here are the edited highlights

Our trip was planned just as lockdown began in March. So, it was cancelled. Then when it was rescheduled for September only myself, Derek and Aureal turned up with Kevin and Sarah from the council.

We were on the train to Brighton for an hour and 20 minutes, but it didn’t feel that long. It was sunny when we left so I took a towel and shorts as I was planning on going for a swim. When we arrived we had a walk along the Pier. Through one of the telescopes we could see wind turbines and a person on a jet ski. It wasn’t too busy when we got to the famous Pier but no one else was as excited as me about the funfair rides. We had a two-a-side game of air hockey – we were all very competitive. It was so funny and me and Kevin won hands down. We saw fresh donuts being made in front of us and then eating them hot was fantastic – they were covered in strawberry sauce and a chocolate Nutella dip.

The fish and chips were expensive on the Pier and the seagulls are very big and brave. The seagulls watch you – one man was trying to cover his plate and we saw the birds blatantly take ice cream off a group of women. We were laughing but if that was me, I would have been scared, they’re a lot bigger than you think. We found a fish and chip shop across from the Pier and sat outside and ate. No way could Sarah and I eat a whole one, ‘cause the fish was huge, so we got chips and shared the fish and there was plenty.

We did get to the beach, and I got soaked, but it was worth it because the sea salt is good for our feet. I think if the weather had been really hot, we would have gone in a bit deeper than our knees.

We had such a good day, we even got to buy some rock for all the hostel residents and staff. All in all, it was the best day out I’ve had since coming to London years ago.