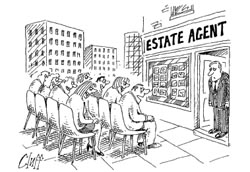 We‚Äö?Ñ?¥re here to watch house prices come tumbling down
One in 10 people struggles with rent or mortgages, says Crisis, and it‘s going to get worse The number of people who will be made homeless in 2009 looks set to soar as the credit crunch bites into the poorest people's jobs, savings and homes. Research done by homeless charity Crisis found that almost one in 10 people were struggling to keep up with rent or mortgage payments, whilst a YouGov poll found 41% of those questioned knew someone who had recently lost their job. Families on lower incomes are more vulnerable, the survey found, with 28% worried about losing their homes, compared to 21% of the wealthier respondents. Crisis chief executive Leslie Morphy said: "The economic downturn is hitting the poorest the hardest. Many are struggling to keep their homes. The situation is only made worse by pressure on jobs, with unemployment levels set to reach two million by the end of the year. " Shelter are also concerned. Adam Sampson, chief executive, said: "With repossessions soaring, thousands stuck on council housing waiting lists and hundreds of homeless households trapped in temporary accommodation, it seems everyone is feeling the effect of the current housing crisis". Both charities launched Christmas campaigns backed by politicians the public alike and will keep up pressure on the government to deliver on its promise to build more affordable homes.
< Swindon shelter turns away 300 Beach bums >