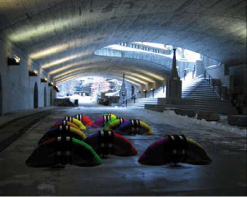 Designers hope plastic domes will shelter homeless communities Designers in Italy and America are hoping that plastic domes will help in the fight to provide shelter for their homeless communities. In Italy, architecture and design group Zo_loft has produced plans for a 'wheely shelter'. Consisting of a large rubber tyre, housing two plastic tents that pop out either side of the tyre's rim when needed, the shelter can be folded up and pushed along during the day and then popped out at night. The shelter also comes with a large back that fits in the centre of the wheel for storing items. The designers hope that by having two tents, which look like giant cylinders sprouting out from each side of the wheel, the shelter will provide homeless people an area in which to live and store their possessions. Zo_loft hopes the design will bring a whole new language to the streets: according to the firm's promotional material: "The businessman is the one with the overnight bag; the homeless man will be the one with the coloured wheel." On the other side of the Atlantic, US designers are hoping that a wooden-framed igloo-type structure will help provide shelter. Much larger than the Zo_loft design, these permanent structures are being distributed by the 7th Haven organisation across the States to help house some of the country's 500,000 former servicemen. After this, the company hopes to set off around the world with its design, in an attempt to build seven million cost-effective and energy-efficient homes for the homeless and poor in the next seven years.
< Forty per cent fewer young homeless in B&Bs Japanese cyber homes >