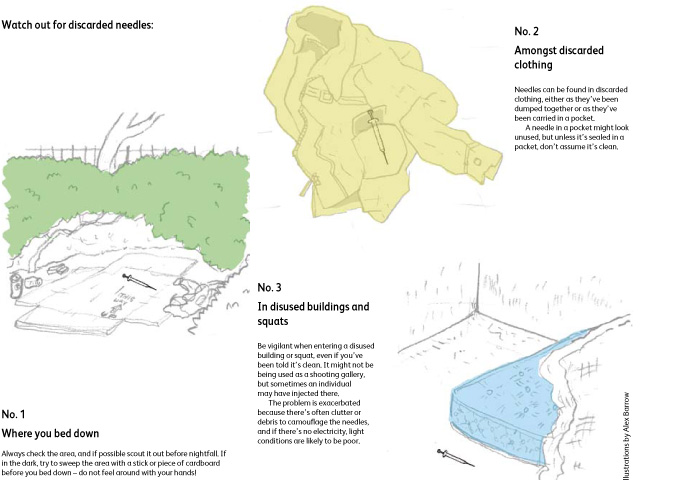 Illustrations by Alex Barrow
How to prevent needle injuries Needlestick injuries are when your skin is punctured by a needle, either as a user around other people injecting or just coming across discarded needles. The message is worth repeating, but rather than reprinting my words, I thought it better to produce a visual aid. So, this month is part one of Nurse Flo's quick guide to needlestick injuries and safety. The dangers in getting a needlestick injury from a needle are threefold: infection could be caught from the blood on the needle, bacteria from the dirty needle itself, or from contaminated drugs the needle may have contained.With blood borne viruses, some live a short period outside the body, whereas others persist for months; if you see old blood on a needle, don't assume it's safe. Even an unused, discarded needle has potential risk with the bacteria from the environment being present on the needle, for example tetanus. And, it's important to consider the potential for the needle to have remnants of drugs that contained bacteria, such as clostridia. Before we get back to 'what to do if...' next month, be aware of the dangers, and try to avoid getting a needlestick in the first instance. Finally, if you are a intravenous drug user, help everyone stay safe by disposing of your used needles in a safe place - ideally in a sharps container. Watch out for discarded needles: No 1: Where you bed down Always check the area, and if possible scout it out before nightfall. If in the dark, try to sweep the area with a stick or piece of cardboard before you bed down ‚Äö?Ñ?¨ do not feel around with your hands! No 2: Amongst discarded clothing Needles can be found in discarded clothing, either as they‚Äö?Ñ?¥ve been dumped together or as they‚Äö?Ñ?¥ve been carried in a pocket. A needle in a pocket might look unused, but unless it‚Äö?Ñ?¥s sealed in a packet, don‚Äö?Ñ?¥t assume it‚Äö?Ñ?¥s clean. No 3: In disused buildings and squats Be vigilant when entering a disused building or squat, even if you‚Äö?Ñ?¥ve been told it‚Äö?Ñ?¥s clean. It might not be being used as a shooting gallery, but sometimes an individual may have injected there. The problem is exacerbated because there‚Äö?Ñ?¥s often clutter or debris to camouflage the needles, and if there‚Äö?Ñ?¥s no electricity, light conditions are likely to be poor.
< Street Shield 5: The Clash!