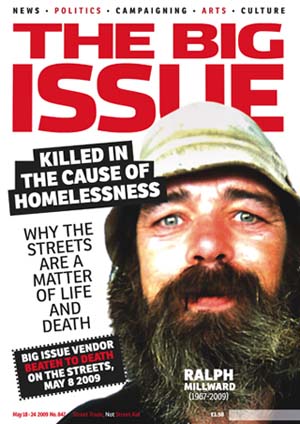 The Big Issue cover of 18 May
Six teens are arrested for the murder of Bournemouth seller Ralph Millward Dorset police have arrested six teenagers, four boys and two girls, after the suspicious death of a Bournemouth Big Issue seller on Saturday 9th May. The body of 41-year-old Ralph Millward was found on the pavement outside a Marks & Spencer in Bournemouth around 7am Saturday morning. A spokesman for the police said the six teenagers are helping police with their enquiries. A post mortem has suggested Mr Millward died of injuries resulting from a violent assault.
< Investigating Novas Judge tells man told to 'go down south' >