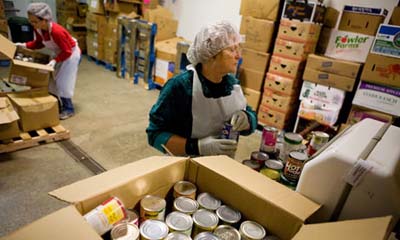 ¬¨¬© K Lorenzi, Rapport
Sad scenes in America as the superpower feels the pinch Sad scenes in America as the superpower feels the pinch In America, desperate scenes are unfolding due to soaring living costs, and in any areas, it's not the local burger bars seeing a boom on business - it's the soup kitchens. One in six of West Virginia's 1.8 million people receive government food stamps - one of the highest rates in the country - and the total is rising every week. Also in the food lines are elderly people who have seen their pensions wiped out by the stock market crash, families driven into destitution by medical expenses because they cannot afford insurance, and the large numbers of people who are continually dependent on welfare. However most of the people claiming food stamps need more due to the cost of living rocketing over the past 12 months. Nardella, who has worked with the food bank in Gassaway, West Virginia, for 25 years, says the programme is feeding 260,000 people a month, and is increasingly seeing entire families coming for help - even when the main wage earner works full time. How can this be? She explains: "A few years ago I was working at a soup kitchen and there were a few men who came in. You could tell they lived on the street. Now there are families, the parents are bringing their children in and feeding them in the soup kitchen. For these mothers especially, that's a hard thing for them to do." She adds: "The people who go into a soup kitchen and take their families are people who thought they would never have to go in and get help". The parents say the neighbours know about their hardship, and the local church has helped them out but they don't want their names known to the wider audience because they're scared they'll been seen as weak and that they'll be accused of being spongers. "There's a view, an attitude towards people on welfare. People around here think God helps those who helps themselves", said a father who works in a fast-food outlet. This isn't his chosen career; it's a new job, one he desperately needed due to him losing his previous one, one he was delighted to get but, if he's honest, one's he's embarrassed about because of its low status and poor wage. "I never thought we would be asking for food, but if I want to keep the job I have to pay for the gas. I have to pay utilities. What's left goes on food, but there are four mouths to feed and it's not enough. I blame everything on the price of gasoline. When it went up to $4 a gallon 18 months ago it affected everybody. It forced up the cost of utilities and food. People were working all day and they still weren't earning enough to pay all the bills", he said. Back at the soup kitchen, Nardella explains that "Families are moving in with other families because they can't survive in their own households". Sadly as the recession continues to bite, the soup kitchens are only of the few places people can go in their hour of desperate need, even those who work full time.
< Revamped services in Edinburgh