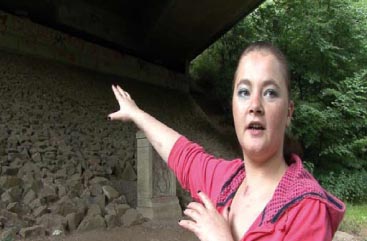 Sammy Wyatt points out the road bridge where she and her partner survived in sometimes freezing conditions.
Journey Through The System premieres in Glenrothes Homeless people in Fife have talked frankly on camera about surviving on the streets and grappling with local services. The filmmakers hope the powerful testimonies will help to transform attitudes to homelessness in the area - where community hostility has led to the planned closure of two hostels. Journey Through The System premieres in Glenrothes this month, before an audience which includes local MSPs. It was the brainchild of clients of the Gilven Projects, a campaign to support homeless people run by the Scottish Christian Alliance. "Some of our young clients pointed out that people's true experiences of homelessness are never really shown,"said Laura McNamee, the project's employability coordinator. Originally planned as a small-scale venture, the resulting film grew thanks to Gilven's contacts with graduates of Adam Smith College in Kirkcaldy. Alex Harron was director, with Gilven providing contacts for interviewees. The documentary touches on the many different aspects of homelessness. In one scene, Sammy Wyatt (pictured), 21, points out the road bridge under which she and her partner survived for months, in sometimes freezing conditions. There are also contributions from a woman who became homeless after fleeing domestic violence, and from two 16-year-old girls who were thrown out of their homes. Frontline workers who support homeless people also give their views, as does Lindsay Roy, the Labour MP for Glenrothes. And three local councillors are shown trying to access local services as though they had just become homeless. "We wanted to show how daunting the whole process can be,"McNamee explained. "Two of the councillors were asked to call a local agency for help. They had to find a telephone number and a phone box, and they were then bombarded with the very personal questions that people are asked when they register as homeless. "The third councillor went to pick up a food parcel. He happened to be intolerant of some food groups, so he would have faced the choice of not eating, or making himself ill." While the film focuses heavily on the struggles faced by readers, it features some success stories too. "We spoke to some people who got through it and found light at the end of the tunnel - as well as some who got involved in drugs and crime," McNamee added. The project was given added impetus by recent decisions to close two Fife hostels: Melanie House in Leven and James Bank Hostel in Dunfermline. Locals had complained of crime and drug use in the hostels. The plan is to replace the facilities with 'core and cluster' services - dispersed temporary accommodation with an on-call warden. "In our opinion these decisions are uninformed, because the councillors don't know what goes on in hostels and the support required by people who live there," said Trish O'Brien, Gilven project manager. "We hope to raise awareness through the DVD."
< A Don deal? Connect 2 >