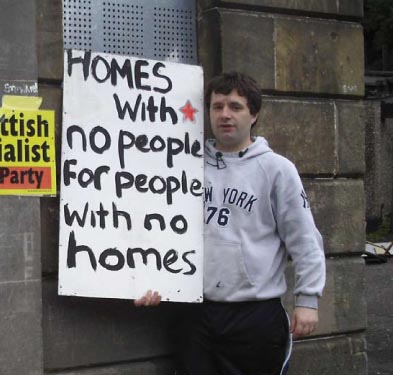 Repair houses instead of tearing them down, says activist. As homeless people struggle to secure a tenancy and hard working families are forced to pay through the nose for poor and often substandard private accommodation, perfectly good houses across Renfrewshire lie derelict, says a local campaigner. Scottish Socialist Party worker Jimmy Kerr (pictured) hopes to persuade Renfrewshire Council to consider refurbishing void houses to bring down housing waiting lists and ease the shortage of homes in Renfrewshire. The 34-year-old activist is particularly concerned with the West End, one area with a very high number of voids, which are not only an eyesore for the residents, but cause multiple related social problems, including vandalism and graffiti. More importantly, they create the preconditions for other more serious crimes including drug dealing and gang activity. "Currently, we have a critical shortage of housing across Renfrewshire and Scotland," Kerr said, "yet demolition seems to be Renfrewshire Council's answer to everything, and we have seen hundreds of potential homes flattened , which could have been brought up to standard. "We are now campaigning to have tenements brought up to standard instead of being razed to the ground."
< Connect 2 On a mission >