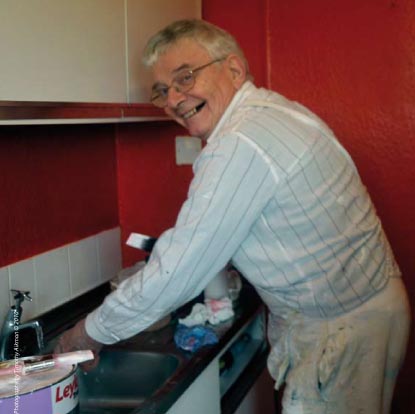 If people are willing to help themselves then we want to work with them and get a good job done. (Photo: Timothy Aikman)
Fresh Start aims to make the move from the streets into your own home seamless

Fresh Start was started in 1999 by a group of church volunteers, who organised collections of household goods to donate to people moving into new homes. Over the years the project expanded, and the donations became the Starter Packs scheme, including items such as kettles, toasters, TVs, lamps, bedding, pots, pans, mugs, plates and much more.

Starter Packs help to alleviate the financial pressure of setting up a new home by providing important household items that usually take some time and money to accumulate. Similar schemes have been set up around Scotland, such as Instant Neighbour in Aberdeen and Starter Packs Glasgow. The items aid the transition between homelessness and settling into a new tenancy.

Now in its tenth year, Fresh Start runs the largest Starter Packs programme in Scotland, providing support to around 2,500 tenants a year in Edinburgh, Midlothian and East Lothian. In the past 12 months alone, 6,723 packs were distributed, and at any given moment, the warehouse is stacked with thousands of items, ready for individuals and families who need them.

The donations are all of a high standard. Homeless support worker, Ian McFadyen, said “We’re very specific about what goes into the packs. If we wouldn’t use it ourselves, then it doesn’t go in.”

However, nothing goes to waste, either - they find a use for almost everything McFadyen explains: "We recycle. Bed linen that's worn and unusable is sent to cat and dog homes. If we have extra towels, we supply the Cowgate crisis centre. We give blankets to the Bethany Trust night services. We make the most of everything; nothing just sits in the warehouse."

Being environmentally conscious has had a big impact - all light bulbs used and provided by the charity are now energy-saving, and over 41 tonnes of material was diverted from landfill in the past year.

Following the growth of the Starter Pack scheme, Fresh Start has found new opportunities to expand. An electrical testing service, initially established to check donated appliance safety, was extended to portable appliance testing for charity shops around Edinburgh. The service enabled volunteers to receive training in electrical testing, and resulted in the creation of two six-month placements for trainees, and a permanent post. It is now a successful business venture, which generated over £25,000 for the charity in 2008.

Sid Stewart, 39, began to volunteer at Fresh Start after receiving a starter pack when he moved into his new home. He trained in electrical part testing at Stevenson College, and was awarded a six-month contract, before gaining a permanent job.

"The starter packs were a big boost when I moved in,” he says. “The volunteering gave me confidence by getting back into the working environment. It helped to structure my week and the training gave me extra skills. At Fresh Start everyone works together as part of a team and everyone’s input is valued.”

McFadyen agrees. “The people at Fresh Start all come from different backgrounds. There are volunteers, support work professionals, people who have been homeless. It’s a great mix, with the same goal of getting tenants established in homes as easily as possible.”

One of the most exciting forms of this teamwork is the Hit Squads initiative, in which volunteers help tenants decorate two rooms in their new home. The tenant signs up to be fully involved in the process, and the volunteers then call round and paint the rooms alongside them. It’s a fun and active couple of days, which allows people to take ownership of their home and make new friends.

Brian, 30, had his flat decorated shortly after moving in, and now volunteers regularly on the Hit Squads. He said: “I really enjoy the work and it’s been great meeting different, interesting people. The decorating helps people a lot. If people are willing to help themselves then we want to work with them and get a good job done. It’s satisfying to see people afterwards and for them to say thanks and have pride in their home.”

Positive comments and feed-back adorn the walls of the Fresh Start office (pictured right). One says, “All of the volunteers were fantastic. There was a laid back atmosphere, despite how hard we were all working - good banter and great chats.” The Fresh Start motto is “Getting off the street is only the beginning”, and with their continued support people are moving onwards and upwards.