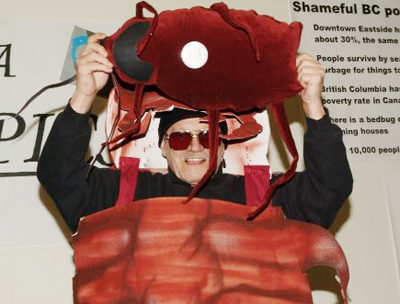 The Assistance to Shelter Act, passed at the beginning of December 2009, allows police forces in the city to "assist homeless people to shelter during extreme weather conditions". Civil liberties campaigners and homeless groups have nicknamed it ‘The Olympic Kidnapping Act', alleging that Vancouver's government passed the law as a means of forcing homeless people off the streets before the international focus of the Winter Games is upon it.

"This Kidnapping Act creates a state of fear in the downtown Eastside," says Stella August, a member of a community group in one of the most poverty-hit areas of Vancouver. "We are angered at the hypocrisy of a government that closes down emergency shelters, while allowing police to forcefully displace homeless people against their will. We have already witnessed waves of police crackdowns over the past year, and we are not foolish enough to believe that this is a coincidence leading up to the games."

The city's government passed the law in response to the death in December 2008 of a homeless woman whose shopping-trolley shelter caught fire. The case of Dawn Bergman, known by others on the street as ‘Tracey', shocked many people in the region and increased pressure on Vancouver's politicians to take action on the city's homelessness crisis. Under the Assistance to Shelter Act, police can prevent people from trying to stay outside during Vancouver's coldest periods, when temperatures can drop as low as -10 degrees Celsius.

Canada's Housing and Social Development Minister Rich Coleman, speaking on the day the legislation was passed, explained: "When an extreme weather alert has been issued, we want people at risk off the streets and into safe accommodation. What we want to do is show people the supports available to them, including a warm bed and a hot meal."

But critics have argued that the government has manipulated Tracey's high-profile death in order to force through an unconstitutional law. "This legislation represents a return to the vagrancy laws of the 19th century, which saw people criminalised simply for being poor and having nowhere to go," says Laura Track, Housing Campaign Lawyer for Vancouver firm PIVOT. "The minister knows this is an unconstitutional law; this is a cynical strategy by the Liberal government to force poor people off the streets for the Olympics before courts strike the legislation down, which will, unfortunately, take months if not years."

"This is not the first time an Olympic host has resorted to using police to force homeless people out of sight," Track adds. "As a city and a province, we should all be truly disappointed to see the Vancouver 2010 Olympics going exactly the same way."

In order to draw attention to the homeless situation in the city, campaigners have organised a ‘Poverty Olympics' to be held in Vancouver five days before the beginning of the official games. With events like ‘Skating (Around Poverty)' and with mascots including Creepy the Cockroach and Chewy the Rat, the event is aiming to embarrass the government over its failed housing policy, at a time when the world's eyes will be on the city. Organisers have criticised the government for cutting the budget on social services, legal aid and healthcare while spending increasing amounts of money on Olympic-related projects.

The Poverty Olympics' Organising Committee released a statement to reporters saying that: "Grinding poverty and growing homelessness are happening despite some bold promises to create a positive Olympic legacy - promises such as building more social housing, reducing homelessness, and not displacing poor people to make way for Olympics-driven development."

Official figures show that more than 2,500 homeless people live on the streets of Vancouver, a figure that has increased by 300 per cent in the last decade.

As increasing numbers of rough sleepers are forced off the streets, Vancouver's shelters are reaching critical capacity, and even emergency overflow hostels are being forced to turn people away.

The local government is opening two new emergency shelters in the weeks before the Olympics start in a bid to deal with the larger numbers of people forced into hostels as the Assistance to Shelter Act starts to impact on rough sleepers in the city.

"We're seeing just how big the demand is for shelter and housing in our city," says the city's mayor Gregor Robertson. "It's not just the Downtown Eastside that needs housing - it's neighbourhoods across Vancouver."