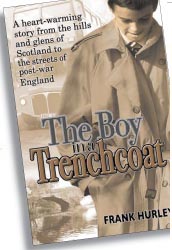 One of Scotland's top journalists Frank Hurley has written an autobiography (pictured) about his childhood days recounting his childhood growing up in homeless hostels in London.

The Boy in a Trenchcoat, the biography of Hurley, the son of a Scottish mother and Londoner father, tells of the hell of living in homeless hostels in the sprawling London Borough of Croydon and the unbridled happiness of running free in Highland hills and catching trout in burns and lochs.

The memoirs shine light on one man's experience of growing up in the post-war period, when a chronic housing shortage led to thousands of homeless families forced to live in squalid and dangerous conditions.

< Homeless couple forced to move on Work for your benefits demo >