First aid on the street 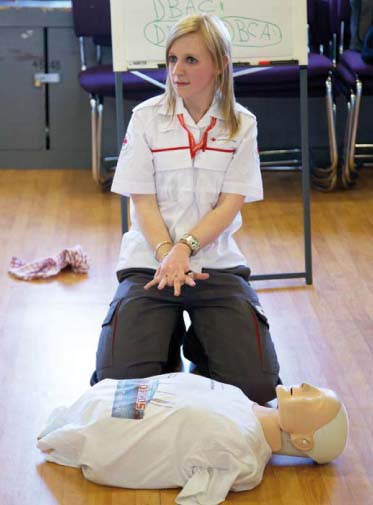 More than 150 homeless people have been trained in first aid as part of a Red Cross scheme to have “a first aider on every street corner”.

“Homeless people have seen and experienced first-hand most of the subjects we cover,” explains Jimmy Connolly, a community-based first aid trainer working with the Red Cross. One of his clients, trained at a session at Crisis in December, used his new CPR skills when a man collapsed in a pub only 10 days later, keeping him alive until an ambulance crew arrived.

But training the homeless in first aid isn’t just about treating wounds or giving mouth-to-mouth, says project co-ordinator Anna Willmington. “We have three main aims for this project,” she explains. “We want to improve community resilience through first aid training, build people’s confidence and help bridge the health gaps experienced by homeless people.”

The courses also try to dispel some of the common myths about first aid, such as the ‘fact’ that chest compressions make sufficient CPR, without the need for mouth-to-mouth, or that using a tourniquet can lead to amputations later on.

And as well as reaching a community that doesn’t always turn to doctors in time, First Aid for the Homeless is also about building people’s confidence - in themselves, as well as in their new skills.

“First aid is also a highly regarded skill,” says Willmington, and one that she hopes will push people to consider returning to education, employment or training - or some of the 35,000 volunteer positions offered by the Red Cross around the UK.

Rodney, 31, from London, attended one of the sessions at Broadway 65 in Hammersmith. “I wouldn’t have felt comfortable stopping to help someone who was in trouble before,” he says, “but now I feel a lot more confident - and I’d definitely like to learn more.”

“Anyone who wants to be able to help someone in need should do one of these courses,” adds Rodney.

His is a common viewpoint - many people do not want to get involved when they see someone in trouble - but First Aid for the Homeless hopes that its courses will give people the confidence and the willingness to step in when someone needs help.

“We want a first aider on every street corner, in every family and within every community,” says Willmington, “so they know how to deal with emergencies.”

First Aid for the Homeless launched on 1 March and will be running for 12 months, though Willmington hopes that volunteers will keep the scheme going after its initial first year.

Along with around 20 organisations that are currently involved, the Red Cross aims to train at least 500 homeless people in London over 12 months, bringing basic first aid to the streets through night shelters, walk-in centres and hostels across the capital.

Each session lasts between one and three hours, with each course being tailored to the needs of those attending on the day. “As well as first aid skills, we can also discuss needlestick and other sharps injuries, blood-borne viruses, and drug and alcohol awareness,” explains Willmington.

The training is carried out at service centres to make it more accessible to users, and although each session is led by a trainer, they are ‘designed’ by those who attend.

The scheme is aimed at everyone from rough sleepers to those in shelters or insecure and supported housing, so the needs of different groups can be really diverse.

“We can offer first aid knowledge about how to prevent, recognise and treat certain conditions such as dehydration, hypothermia and trenchfoot that will more specifically but not exclusively affect groups like the street homeless,” says Willmington, “but we do not assume people need or want to know specific skills.”

Anyone interested in learning more about First Aid for the Homeless should contact Anna Willmington by email: awillmington@redcross.org.uk

For more information about the volunteer opportunities offered by the Red Cross visit www.redcross.org.uk/get-involved/volunteer