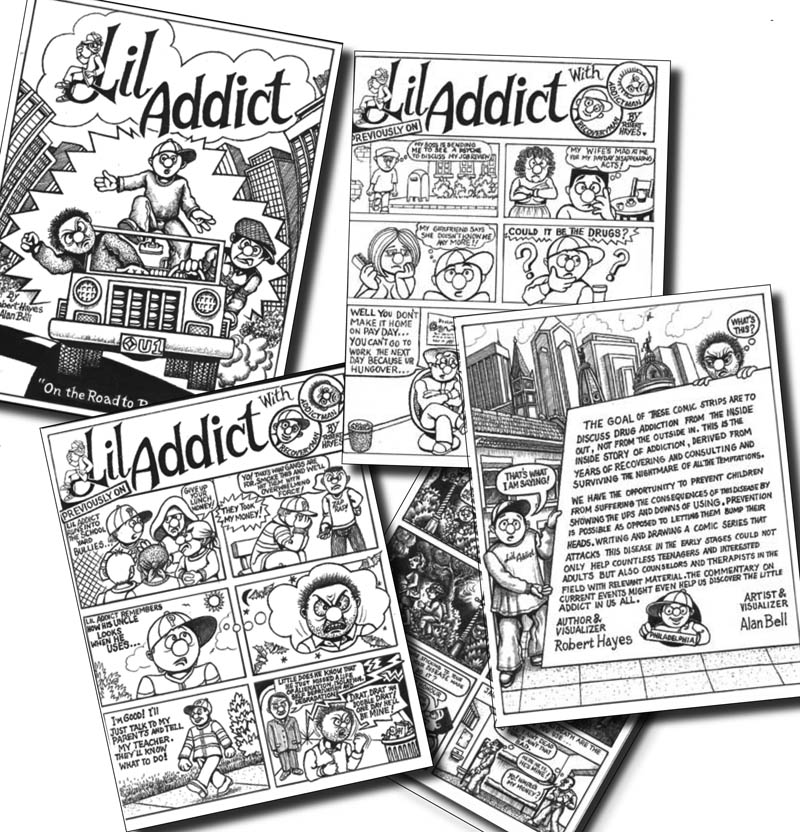 A former drug addict has found a novel way of telling others about his life and at the same time warning younger people about the dangers of slipping into drug use.

Robert Hayes, a former homeless addict in the US city of Philidelphia, now writes a comic strip ‘Li’l Addict’ [Little Addict] which is published in a number of local publications, including One Step Away, a homeless paper sold on the streets of that city.

Last year, Hayes was living in a shelter when he met Alan Bell, who was the ‘art facilitator’ there. Bell encouraged Hayes to write about his decade-long cycle of drug use and homelessness, and this lead to them co-creating the comic strip ‘Li’l Addict.’ Hayes provides the autobiographical narrative, from his childhood problems to the years of alcohol and drugs, and it’s down to Bell to draw the strip

It’s a odd pairing, with Hayes, the black resident of Philidelphia writing his life down to be drawn by 66-year-old, white South African Bell, but since the two met at the Ridge Avenue shelter early in 2010, the comic strip has been a hit with the 12,000 monthly readers of One Step Away. “I didn't know how to take Alan at first, we are as different as can be, but very much alike. He’s the type of person that makes the world a better place.” Hayes told The Pavement.

Asked what they’re currently working on, Hayes added that they’re planning a clothing line featuring characters from the strip, and that personally he was busy with “my new apartment, furnishing it, working, going to school to be a peer specialist.”