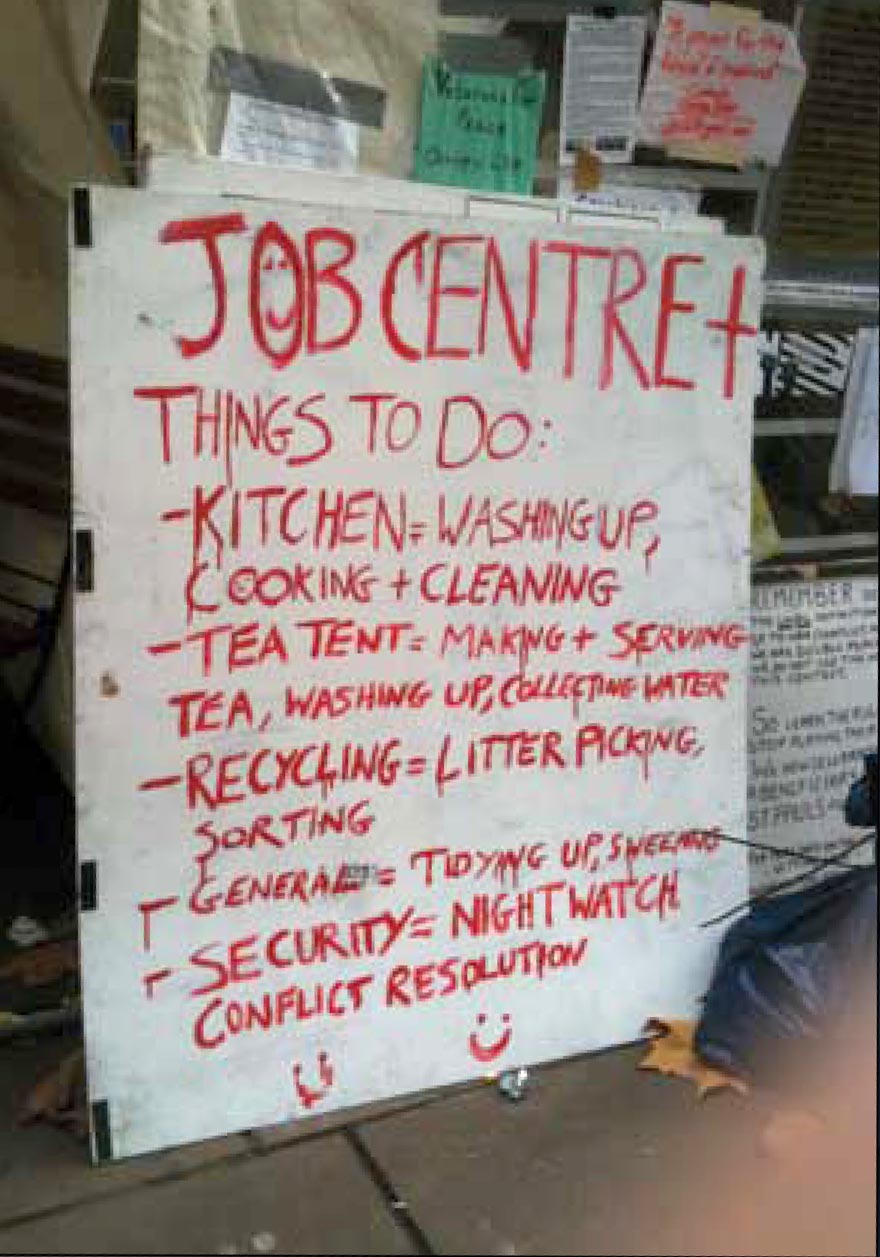 Traditionally, political protests might see placard-waving marchers on a street raising awareness of issues that were close to their hearts. These days, protestors are more likely to set up permanent camps in a local park to get their point across. Rough sleepers in the City of London are now sharing the streets with permanent protestors who are camped at St Paul’s Cathedral and Finsbury Square, and some homeless folk have joined the Occupy movement, finding in it a place of shelter.

Ace, 45, had been sleeping rough for 25 years after leaving the armed forces in his twenties. Ace moved up and down the country, staying on the streets or in shelters and occasionally getting casual work. He recently moved into the Finsbury Square protest camp where he has set up a free bike repair shop.

“Moving here to Finsbury Square and taking part in this protest is the first step for me, for a better life. I had been sent to a hostel before, down in Waterloo. It was infested with fleas, it stank and it was full of pretty strange people, I couldn’t stay there,” he said.

“I turned up down at St Paul’s, they gave me a tent and a blanket and then I came up here to Finsbury Square,” said Ace, who is taking part in the protest for his son, Danny, who is five.

“I want my son to get a good education and not to get messed up by the same system that I had to deal with. The guys in the information tent even got in touch with Danny’s mum on the email and she sent me a video of him. I cried for hours,” he said.

Ace used to work in a bike shop in Brixton before he joined the army. Using the skills he learned years ago, he has been fixing bikes for the public and also sprucing up donated broken bikes to sell. He runs solely on donations and gives half of what he earns to the Occupy movement.

“I used to drink nine litres of cider a day, but these days I only drink four cans of beer. You need a steady hand to fix bikes,” he added.

Despite being a little more protected by the community within the camp, the dangers of sleeping rough are still evident. Ace said he has had three bikes stolen so far, and drunken passers-by have urinated on his tent.

And not every new arrival makes him or herself useful to the protest community. Rough sleepers, some with serious drink and drug problems, have arrived at the camp. Protestors decided that a “homeless representative” might better engage with the new arrivals and help to enforce the no drink/drugs policy that runs on both sites. Ace happily accepted the role.

“Everyone is welcome at the camp, as long as you don’t bring drink or drugs here. I have cycled around Old Street looking for rough sleepers to tell them to come along and have a cup of coffee or some soup. I remember what it was like,” he said.

At St Paul’s, the huge camp kitchen provides breakfast, lunch and dinner, as well as hot and cold drinks throughout the day. Everyone is fed. Bear, a protestor who has been here since the start, set up the camp kitchen, which has grown from a small stove and a tent, to a marquee that feeds hundreds every day.

“If people want to come here and help and get involved, we welcome them with open arms. There is a strict no drink or drugs policy, though, and we demand that everyone respects each other and themselves,” he said.

“We had to start closing the kitchens after midnight because it started to get a bit rowdy,” he added.

Justin, 40, a saxophone-playing protestor who, at the time of writing, has been at St Paul’s for two weeks, says that homeless people support the protest more than anyone else.

“I met a guy from Liverpool who had just come back from Afghanistan. His wife had left him and his house was repossessed. He couldn’t find work in this recession. He came down here and found a purpose, a place to give a voice to the anger he feels at the system that’s let him down. I’ve also met guys as young as 18 with no place to go but who just want to help,” he said.

The Occupy movement has called out to charities and welfare organisations to help them support the influx of vulnerable people arriving at tent city. A welfare tent has been set up at the St Pauls site where reflexology, counselling and massages are offered. There is talk of alcohol and drug workshops running soon.

Charities appear to be against the idea of providing support services at St Paul’s. Petra Salva, director of No Second Night Out, a charity working on picking up rough sleepers new to the streets of London, spoke of the protestor’s plans to Inside Housing: “While they have a well-intentioned, political point of view, they are probably not even thinking about how that will affect, or get in the way of, the City of London getting people off the streets.”

Ronan, a protestor who helped set up the welfare tent, argues that it’s a crucial part of the camp: “People need support. For a lot of people, the camp here represents hope. There is a lot of “activist burnout” and a welfare tent helps to remedy that. It’s not a duplicating service, we’re not trying to compete with charities and professionals, but on the campsite it is needed. It’s a listening service above anything,” he said.

The debate here in the UK appears more flexible than that in the States. In New York, kitchen workers at the Occupy Wall Street movement revolted and refused to provide food for three hours in protest against feeding the city’s homeless. In another Occupy camp in Burlington, Vermont, rumours circulated that homeless people were being referred on to the camp by service organisations, although the services denied the accusations. Authorities have now moved in and forcibly removed the Occupy camps, sparking nationwide revolts and mass arrests.

Perhaps buoyed by the apparent success of their American counterparts to remove the camps, London authorities served notice on the Occupy movement at St Pauls to leave the site by 17 November. The deadline passed and protestors have vowed to fight the eviction through the courts.

The fate of the Occupy movement in the UK is unclear. It is also unclear where the homeless will go if the camps are cleared. When the lines of distinction between street sleeper and political protestor are becoming ever more blurred, and while protest movements can set up camp in public places without being moved on and provide food, shelter, community spirit and a sympathetic ear, the alliance between homeless people and demonstrators looks set to continue.

The legal battle to evict the protest camp outside St Paul’s Cathedral will begin on 19 December.