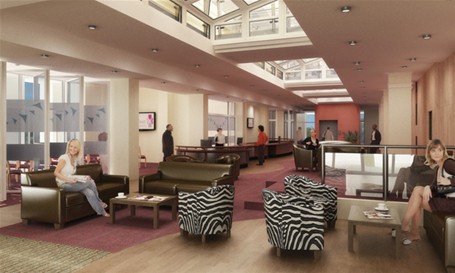 The future of homeless living has come to Birmingham with the revolutionary renovation of the former Snow Hill hostel. Housing provider Midland Heart has completed a £10 million redevelopment project that has seen the dated hostel transformed into 91 modern studio apartments.

The accommodation will be available to men and women with a commitment to undertaking employment, education or training, with support and advice services on hand to enable them to become fully independent. Says Midland Heart’s Stephen Philpott: “The new plans for Snow Hill will transform both the physical building and the service provision, offering many homeless people in Birmingham the chance to get their lives back on track.”

With hopes of creating a “vibrant mixed community”, almost half of the one-bedroom apartments are to be let as affordable homes to private tenants seeking city-centre living. Midland Heart hopes that the scheme will redefine the provision of homeless housing services which can all too often lead to segregation, giving people the kind of support needed to help them beat homelessness permanently.

The complex will also host an IT Suite, coffee shop and on-site launderette as well as being the new home to the Frost & Snow social enterprise bakery, which will provide the skills and training to help former homeless people get back into work. Although altering the Snow Hill provision to move-on accommodation will remove some direct access spaces across the city, Midland Heart have promised to maintain at least 200 direct access spaces to fulfil the support needs it is contracted to provide.

The Snow Hill building has seen many changes over the years, first opening its doors in 1885 as The New Star Theatre of Varieties. It subsequently became the Metropole Cinema, until 1941 when bomb damage forced it to close its doors. In 1951, the building was rebuilt as Aston University student halls of residence, which later became the Birmingham YMCA. Under private ownership the building then became a hostel for 157 of Birmingham’s homeless men, before being taken over by Midland Heart in 2006.

The project has been funded by the Homes and Communities Agency, Birmingham City Council, Advantage West Midlands and Homeless Link.