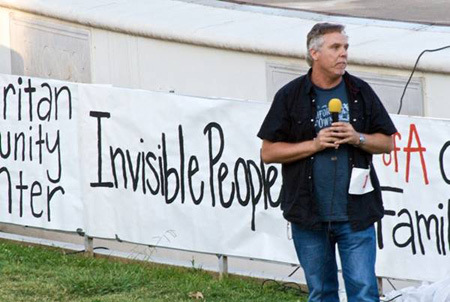 Mark Horvath, the US founder of Invisible People, returned to the UK in the end of November. The Pavement covered his first visit in July.

The InvisiblePeople.tv project – the internationally recognised non-profit that tackles poverty and homelessness by using the power of social media – returned to London on flights donated by British Airways, and teamed up with the charity Broadway.

“Invisible People connects people to the face of homelessness in a direct and meaningful way that humanizes the subject and builds empathy in the viewer. This is much more important and impactful than simple awareness” said Horvath, who was himself homeless in America.

“As I have done across the United States and Canada, I want to give the people experiencing homelessness in England a chance to tell their stories. Once we know our neighbours it’s not as easy to ignore them, and that’s where real positive change starts”

Howard Sinclair, chief executive of Broadway, said: “We are delighted to welcome Mark to the UK and to the team at Broadway. Everything we do at Broadway is geared towards offering homeless people not only a route away from the streets but also a voice to tell their story. Mark’s visit will empower both us and them to tell their story.”

Horvath flew back to the US on 4 December.

< London fails in target Charging on the move >