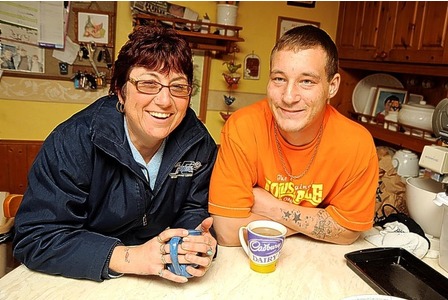 ¬© thisiscornwall.com
Woman who takes in homeless and troubled young people failed to license her home as a ‘place of multiple occupation’

A woman who takes in homeless and troubled young people has been made to pay thousands of pounds for breaking health and safety rules.

Julie Stoddern from Cornwall was fined £500 plus £4,000 in legal costs after she failed to license her home as a ‘place of multiple occupation’. She has spent years taking in young men, many of whom have come out of prison or have problems with drug abuse.

Ms Stoddern, who lives near the town of Camborne, even lived in a caravan so that she could take more people into her house. Last year her good work with vulnerable young people was featured on a BBC Cornwall programme

But council officials inspected the house and issued her a warning notice about overcrowding in her attic room. They were also concerned that the stairs leading to the room were dangerous because they did not have a bannister.

After she did not respond to the warning, the council took her to court, where she pleaded guilty to ignoring the notice.

The magistrates said they understood her actions were “quite honourable” but said the rules were in place “for the safety of residents”.