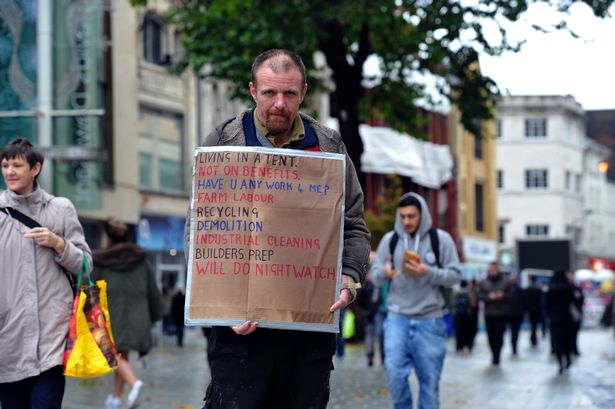 The sign that started it all...
Two homeless men became a sensation last month when they advertised their job hunt via social media


Two homeless men became a Twitter sensation last month when they advertised their job hunt via Twitter, with the help of a kind passerby.

Ken Jones, 44, and Ron Rogers, 40, were living in a leaky tent near the Hilton Hotel in Cardiff, after seasonal work dried up leaving with them with no money for a roof over their heads.

They made posters that asked “Have you any work for me?” and stood with them in the centre of town promising cheap demolition, recycling and security work.

The pair unwittingly hit the social media sphere when Ani Saunders posted a photo of Ron and his sign on Twitter. Within an hour it had been retweeted over 250 times, 700 within a couple of hours and nearly 2,700 to date.

Ani, who’s 29 and an artist, told The Pavement: “It’s so terribly common to see people living on the streets these days. It certainly seems to be an increasing problem. It’s baffling to see how many people are failed by the system, mind-blowing, really.”

Ani says she hoped to “increase awareness of Ron and Ken’s current situation and also increase their chances of employment.”

“It seemed that people really wanted to help them find a job, it was very heart-warming to see such a positive reaction.”

But a 2005 report by St Mungo’s highlighted the unique problems homeless people face when seeking work.

Two-thirds of the 100 homeless people they asked said that agencies and employers wouldn’t give them a chance. They said expenses like work clothes and equipment were unaffordable. Half also said that not having a mailing address was a barrier too.

Ken agrees. He told us: “Someone wanted me to hand out flyers in a suit – but I live in a tent!”

Only about two per cent of homeless people are in full time employment, according to a report by Crisis with 12 per cent working part-time and 13 per cent volunteering.

But current data from the Office for National Statistics shows the number of unemployed fell by 48,000 between July and September this year. The unemployment rate dropped to 7.6 per cent – its lowest in over three years.

At the same time the figures for long-term youth unemployment have quadrupled in the last decade.

The government’s £5 billion Work Programme, which was launched in 2011 with the aim of getting more people into employment, has been found lacking by a committee of MP’s. They say it isn’t helping the long term unemployed, including homeless people.

Labour MP Dame Anne Begg explains: “The Work Programme has proved much less successful to date in addressing the problems faced by people with disabilities, homeless people, and those with a history of drug or alcohol abuse.

"The government must do more to ensure that the work programme provides effective support for all jobseekers."

Jacqui McCluskey, the director of policy and communications at Homeless Link, said: “Most people who have experienced homelessness want to work but often face the most severe barriers. The Work Programme was created to help break down these barriers, yet our research suggests that it is failing."