The MXU and you 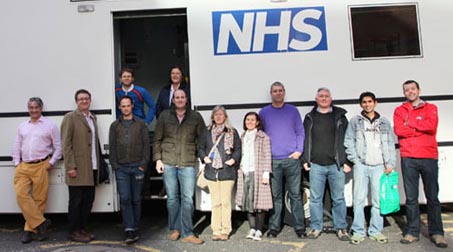 The MXU crew
TB is still alive and kicking. So it‘s just as well the Find & Treat service is too


"We still sadly find too many people who are coughing up blood, who’ve lost so much weight, with ‘I’ve got TB’ written all over them – but no one’s spotted it,” says Alistair Story, Clinical Lead of London-based TB screening service Find & Treat.

And that’s why awareness raising is a key feature of the Find &Treat service, a specialist outreach team that visits homeless hostels, soup runs or wherever else it is needed to screen people for active TB with the help of a Mobile X-ray Unit (MXU).

Every year, the dedicated Find & Treat team screens almost 10,000 people in London. About one percent are found to have TB lesions that indicate active TB.

That’s a lot of screening. And what’s more it’s been on the go for close to a decade, so it’s no surprise that the Find & Treat MXU is now on its last legs. The day The Pavement went to see the van in action, its generator had failed – meaning that day’s screenings had to be cancelled.

Funding for the service has long been an issue – though the will is there, often the commitment past the next three or five years funding stream has not been clear. Questions were recently asked in Parliament about the future of the creaky old unit, and its need for renewal.

So for the team, the news that they are now to get a long-awaited replacement unit in approximately nine months – funded by University College London Hospitals, which hosts Find & Treat at the Hospital For Tropical Diseases – is significant.

Once known as consumption, TB may have declined among the general UK population, but among the marginalised it’s on the rise – with close to 3,500 new cases (that’s 42 per 100,000) every year in London, making it the TB capital of Europe.

“If you look at homelessness you’ve got the perfect storm,” explains Dr Story. The immune systems can be weakened as a result of lifestyle – addiction, poor diet, and other health issues are all factors. On top of that poor or crowded conditions increase the risk of infection.

“The challenge for us is that the classic symptoms of TB – a cough, weight loss, night sweats and a general feeling of tiredness – are perfectly masked by other factors around being malnourished, being cold, being on the street,” he explains.

One way Find & Treat raises awareness of the symptoms of TB is through peer advocates: former service users who, with training from Groundswell, give talks and share their personal experiences.

Erland, a peer advocate, had to undergo eight to nine months of treatment. “It was difficult,” he says, “but I’m glad I stuck with it – I don’t want to go through that again.” Now he goes in hostels and encourages people to come on board the Find & Treat MXU. It takes just 60 seconds, he says.

Through its outreach model, Find & Treat aims to fill the gap not met by traditional, building-based TB services in London.

“No disrespect to any of them,” says Dr Story, “but some of them are on the 18th floor of a hospital, they work very fixed hours, it’s a very appointments-based system, you’ve got to have all your ID and documentation with you.”

And that doesn't always suit people on the streets, some of whom may distrust the NHS anyway.

Oz, another of the peer advocates, remembers visiting his GP many times complaining of night sweats and other symptoms, but despite having countless blood tests was not screened for TB. It was only when he saw a Find & Treat leaflet at the No Second Night Out hub that he had a breakthrough. Oz had mixed emotions when his tests came back positive: “I was angry but at some point I was relieved too because finally I know what’s wrong with me and why I was losing weight.”

Treatment for TB usually lasts a minimum of six months and it’s important it runs its course. To make sure each service user takes their tablets every day, Find & Treat offers support, sometimes training keyworkers to help or even asking people to send a smartphone video of themselves taking their medication. It’s important to look at the whole picture to ensure recovery. The Find & Treat team includes social workers, drug and alcohol specialists and mental health workers as well as clinical staff. It’s even set up its own speciality TB hotel: the St John of God Hospitaller.

And the service has ambitious plans in the pipeline. Soon it hopes to offer instant tests for latent TB, HIV, Hepatitis B and Hepatitis C alongside the screening for active TB. Discussions with Public Health England on his are “quite advanced” says Dr Story.

But they need all the support they can get if it’s going to happen – and funding needs to be secure. Spend now, save later is Find and Treat’s argument, one backed up by two independent evaluations (by the Health Protection Agency and NICE), which both found the service to be very cost-effective and even cost saving.

“The politicians are talking about TB as an issue that can be solved by closing the border,” says Dr Story, “that’s wrong [according to Public Health England’s 2012 TB Annual Review for London, only 14 percent of TB cases were recent entrants to the UK]. We solve TB by controlling it here in London – it’s in all our interests that we do so because we share the same air.”

• In 2012 8.6 million people across the world fell ill with TB
• TB is the leading killer of people living with HIV
• A total of 1.3 million people died from TB in 2012
• About 56 million TB patients have been successfully treated since 1995 worldwide.

< Begbie hits the streets No Second Night Out roll-out >