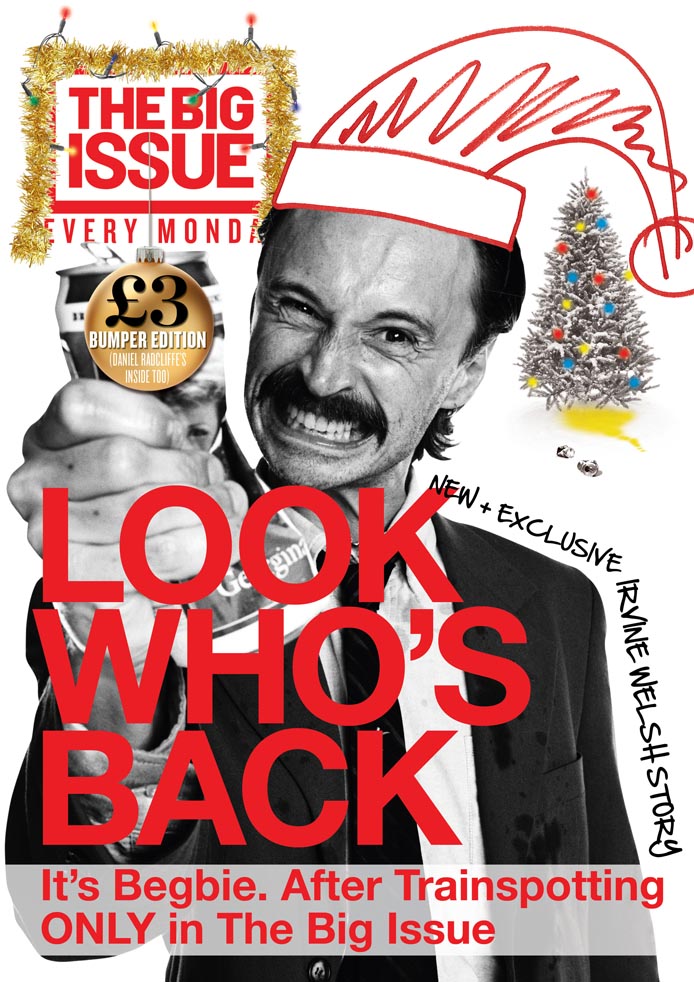 
The author of Trainspotting, the novel and film set in drug-addled Edinburgh in the late 80s, is revisiting the life of lead character Begbie in a new short story to be published in The Big Issue and other street papers around the world this Christmas.

Irvine Welsh shot to fame after the publication of Trainspotting in 1993 and the release of the film three years later, starring Robert Carlyle as Begbie. Welsh has since gone on to further success with novels such as Filth, which was this year made into a film that is currently in cinemas across the UK.

The new story, called 'He Ain't Lager', centres on Begbie visiting his family, including his homeless brother Joe, at Christmas after being released from prison. Welsh said: “I'm not sure where this [story] came from. I never really know. I just think the character has to be full of surprises and I quite like this little twist in [Begbie's] life.”

He revealed that the infamous violent hardman has been rehabilitated through art, and fallen in love. Welsh said there were more revelations about Begbie in his new story and urged people to buy The Big Issue.

Though Welsh now lives in Chicago, he wrote Trainspotting while working in the housing department of Edinburgh council. He has written the new Begbie story in support of the International Network of Street Papers (INSP), a charity based in Glasgow, Scotland, that supports The Big Issue and 121 other street papers in 40 countries.

Welsh admits that he himself is “not disadvantaged in the current housing market, but privileged by it”, and laments that homelessness issues –"ubiquitous across the western world" – are "a product of the weak priorities our political leadership has set.”

Paul McNamee, editor of The Big Issue, says he hopes the story will have people “queuing at their local Big Issue vendor". Maree Aldam, who heads the INSP charity, said “interviews and writing by famous names give our network of homeless vendors a big sales boost.”

< Visible community The MXU and you >