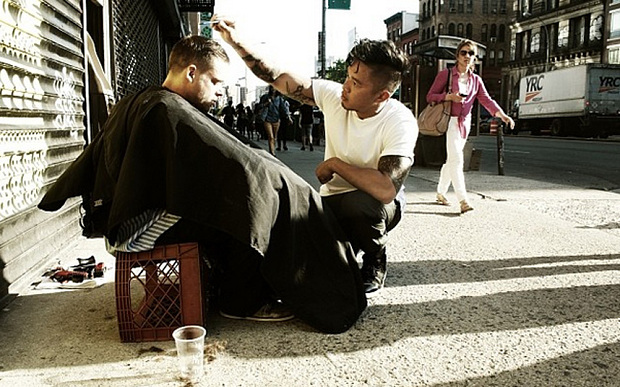 A hairstylist from an upscale salon in New York City has been spending his day off cutting the hair of homeless people, it has emerged.

Mark Bustos is a hair stylist at a smart salon in New York City. But not all his clients need to be wealthy, according to the Huffington Post.

Bustos spends every Sunday – his only day off from work – venturing through the city in search of anyone in need who'd appreciate a haircut. Approaching each person with the same, simple phrase – "I want to do something nice for you today" – Bustos provides cuts to up to six people every Sunday, capturing pictures of often unkempt people he’s given a make-over to on the streets. The pictures of the transformations are posted on his Instagram account and have now received global attention.

Bustos has been cutting hair for those who can’t afford it since May 2012, when he travelled to the Philippines to visit family members. While he was abroad, he rented a barber shop chair from the shop’s owner to provide services to impoverished children in need of a fresh look.

“The feeling was so rewarding, I decided to bring the positive energy back to NYC,” Bustos, 30, told the Huffington Post. He has also given haircuts to those who need but can’t afford them, in Jamaica, Costa Rica and Los Angeles, as well as his home town in the States.