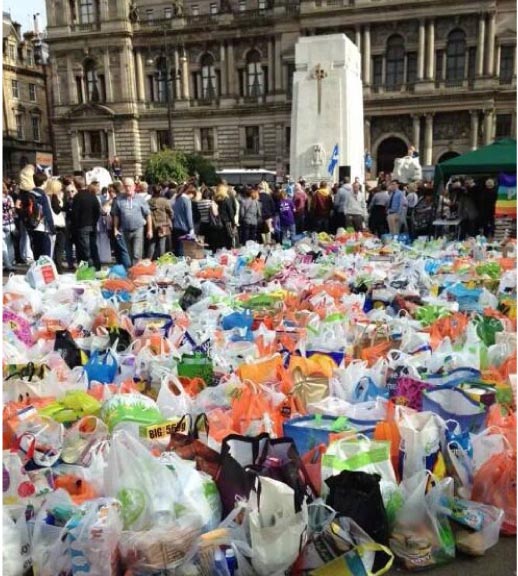 Glasgow’s George Square has become home to a “people’s food bank” as campaigners tap into the yearning for social change expressed in the wake of the Scottish independence referendum.

Though 55 per cent of Scots voted to remain part of the United Kingdom in the referendum last month, in Glasgow 53 per cent voted for independence, and
tensions ran high after the result.

Organised gangs of unionists took advantage of the tensions, leading to outbreaks of violence in the city centre on Friday, 19 September.

Horrified campaigners held a peace rally in response. But when the social campaigners Andrew and Darren Carnegie spoke of their food bank, Glasgow’s Needy, they found Glaswegians rushed to donate, with 100 bags of food collected in the city centre in one day alone.

The father and son team have now pledged to request donations every Saturday. Nore bags of food flooded into the square last week, and will last their food bank for months to come.

Darren, 25, told the Daily Record they were overcome by the people’s goodwill. He said: “It was a stark contrast to Friday night.

“The scenes of violence show a tiny minority of Glaswegians displaying a vile bigotry that’s not representative of anything.

“That’s why we were down there with our peace flags: to show Glasgow is a good city with good people.

“The intention was to speak about peace, about ending bigotry and hatred, and we got on to our food bank.”

Every year, between November and January, the pair organise a foodbank, which helped 300 hard-up Glaswegians in 2013–14.

Darren, who voted ‘Yes’ in the referendum, added: “I was disheartened about the vote, but I know we’ve created something special.

“We now have the man in the street interested in social justice.”

Meanwhile, the Trussell Trust, the UK's largest food bank, reported a sharp increase in the number of donations to branches across Scotland.