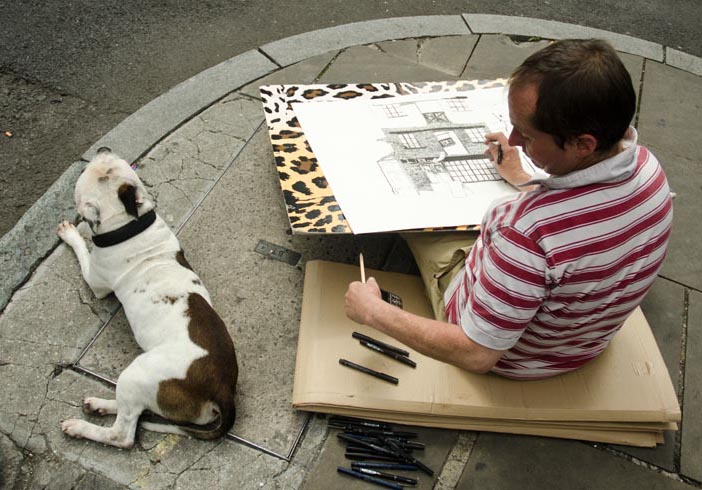 John Dolan was homeless and addicted to heroin. He tells Carinya Sharples how art transformed his life

“With art, it’s about the artist these days – the story behind the artist. And I have a really bloody good story.” John Dolan’s not exaggerating. Aged 10, he found out his parents were actually his grandparents and his mother, his sister: life was never the same again. Since then, he’s survived homelessness, drug addiction, prison and more, before being discovering sketching on Shoreditch High Street and becoming an acclaimed street artist, earning thousands for his original sketches of Shoreditch – and his faithful dog, George.

It’s the kind of rags-to-riches tale that everyone loves. Dolan’s even been approached by a Hollywood producer, interesting in making a film about the 43-year-old's life. But it’s been a long time coming – and Dolan isn’t about to forget all those years in the wilderness. “It ain’t just me being lucky with all this, because I’ve sat there in the snow at times or in the rain under an umbrella trying to draw,” he says. As he speaks, his pen moves smoothly across the paper in front of him, bringing to life George and the faces of wizened old men with just a few deft strokes.

As a lad, growing up in East London, Dolan was always drawing. His grandfather drew too and “passed down the genes”. He hated school with a passion, and so art became a refuge. He left school with no qualifications but “plenty of options”, he says. “In the 80s, it was so easy to get a job. There weren’t a recession or any rubbish like that, you could walk into a job centre, get an interview, start the job and if you didn’t like it you jack it in, go down the job centre again and get another job. It was that easy.” He drifted: trainee horse-saddle maker, colour printer, diamond cutter, meat porter at The Savoy Hotel… “I couldn’t hold jobs down,” he says. “I hated authority. I hated being told what to do.”

Soon he got stuck in the revolving door of prison, homelessness, prison, hostel. And as time went by, the drugs tightened their grip: “I had no power over my addiction. You are powerless. Every bit of money you’re given goes straight to the dealer.” But in the circumstances, he asks, what do people expect? “I say to people ‘Look if you were on the street, you’d like to be drunk or on drugs to block it out’.”

To make do, Dolan would break into shops and restaurants. “I wouldn’t break into houses, but any shop to me was fair game.” Being on crutches for months at a time in the winter, due to the arthritis in his ankle, meant he couldn’t always go out “ducking and diving”, so he claimed Sickness Benefit – until, in 2011, David Cameron started clamping down on benefits. “I jumped through all the hoops... you go and see a doctor and they say ‘Can you put your arm above your head?’ The minute you do, they strike you off because they think if you can raise your arm above your head you can pick a phone up at a call centre.” So he lost his benefit – just six months after moving out of temporary accommodation into his flat off Shoreditch High Street.

And he might have gone back to his old criminal ways if it hadn’t been for George, the Staffordshire bull terrier given to him by a young homeless couple he met who’d been rehoused but weren’t able to take the dog with them. “I bonded with the dog after about a month,” says Dolan, scratching George affectionately, “and I thought to myself I can’t go out thieving if I wanted to cos [if I went to prison] I’d leave my dog”.

He was finally forced to beg on the streets, against his principles (“I don’t come from a background where I sit on the pavement and look up at people with a sorrowful look on my face”). But instead of looking people in the eye, Dolan looked down on his drawing pad, and began to draw again. “I hadn’t picked up the pen in many years – must’ve been about seven years before I last drew anything – and one day I was sitting on the high street drawing and someone come up to me and bought a picture of the buildings that I draw. Then some lady asked me if I’d done drawings of my dog, so I says to her ‘Come back in an hour’, she came back – charged her 20 quid, then I drew another one and they sold." Soon his pictures of the buildings along Shoreditch High Street were selling for £20 quid and his pictures of George for £10.

Word soon got around and he was commissioned to do a couple of pictures for Shoreditch Unbound,, a book which featured work by leading artists such as Gilbert and George and Tracey Emin alongside his own. Then one day he met Richard Howard-Griffin, of Howard Griffin Gallery on Shoreditch High Street, and suddenly the fast-forward button was pressed. “He asked: ‘What do you want me to do for you, John?’" smiles Dolan, "and I said ‘I want you to make me a rich artist’.” He said, ‘I can do that’.”

He gave him £1,000 as an advance and in September 2013, Dolan’s first solo exhibition – George The Dog, John The Artist – opened at the gallery. It was a roaring success. Howard-Griffin had even invited top graffiti artists from around the world to add their own touches to some of Dolan’s cityscapes – drumming up huge interest, and raising £50,000.

The next step for John was coming off drugs, which took time. Getting clean, it turned out, was not just about the drugs. Another part of the process, he says, was rebuilding trust: “Heroin addicts don’t trust anyone. So there’s a lot of that going on, a lot of psychological warfare going on but it’s all good.”

Now Dolan is rebuilding his life step by step. And there’s plenty to look forward to – a show in LA next year to prepare for; musicians and their mongrels to draw for Rockstars and Their Dogs, a charity campaign raising money for Battersea Dogs Home; and a book to promote.

His second exhibition at the Howard Griffin Gallery, ‘John Dolan – John and George’, has just finished, with the proceeds going to The Big Issue Foundation and Battersea Dogs and Cats Home.

It’s not been an easy journey: “God loves a tryer,” he jokes. And his message for others in his position is to do just that. “Take the drugs away from them, clean their act up and anything is possible.”